The tombstone of Peter Erberveld has been relocated from its original site on Jalan Pangeran Jayakarta (Near Gereja Sion or the Portuguese Church) to Taman Prasasti (The Garden of Tombstones) in Tanah Abang. The spike through the skull is a graphic reminder of his fate and the tombstone reads: 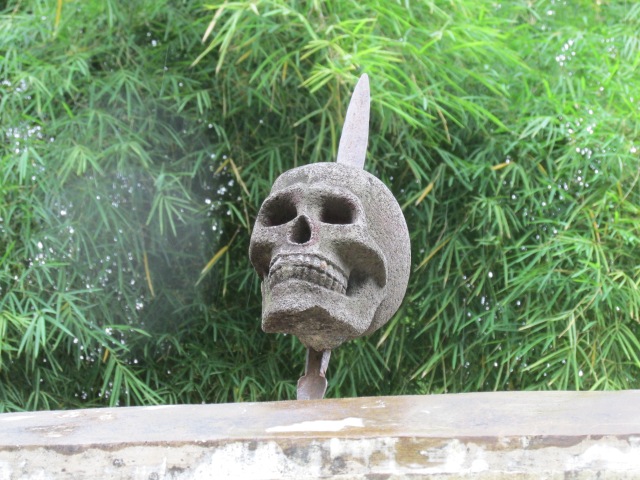 As a detestable memory of the punished traitor Pieter Erberveld nobody shall now or ever be allowed to build, to carpenter, to lay bricks, or to plant in this place. Batavia, 14th of April 1722.

Peter Erberveld was of mixed blood and his crime was to plot a rebellion against the Dutch East Indies Company (VOC), and according to his accusers, kill all the Dutch inhabitants of Batavia on New Year’s Eve of 1721/22.

A few days before that date, he, his co-conspirator a Javanese named Raden Kartadria and seventeen followers were arrested during a secret meeting at his house on Jalan Pangeran Jayakarta. This was followed by the arrest of another thirty of his followers. After confessions were obtained by torture, he and his followers were cruelly put to death on the Gallows Field in front of Kasteel Batavia and not as usual in front of the Stadhuis. This may have done for security reasons as the VOC was afraid of a continuation of the planned rebellion or since the leading conspirators were ‘hung, drawn, and quartered’, the horror may have been considered too much for the general citizens of Batavia.

The stone tablet in memory of the traitor Peter Erberveld is inscribed in both Dutch and Javanese as a warning to all the 18th century inhabitants of Batavia.