Kumba Island lies in the Banda Sea of Eastern Indonesia and north of the island of Lembata. The island must be sitting over a hot spot in the earth’s mantle as it seems to have been active over many years. The sailing ship Vega stopped at Pulau Kumba in 2015 and its captain Shane Granger took these beautiful photographs of the island and its active volcano. 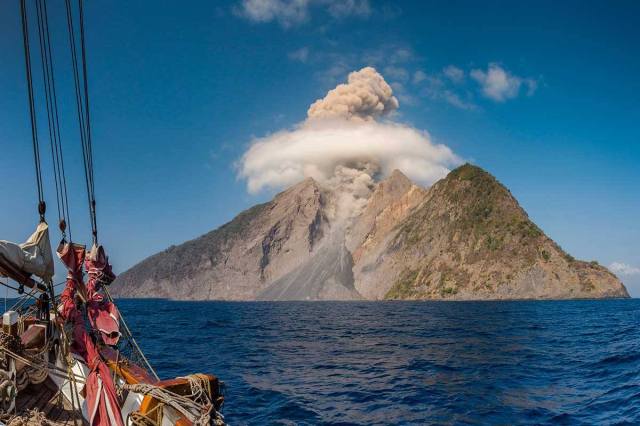 And the amazing donut like cloud formation surrounding the eruption

And how about this night image of Pulau Kumba erupting with the full moon in the background.

Subject to the usual sailing conditions, Sea Trek Sailing Adventures plans to visit Pulau Kumba this year in September during their 14 day East Indies Spice Exploration voyage around the islands of the eastern Indonesian Archipelago – please see the map below and go to their website for details.

The East Indies Spice Exploration voyage from Maumere to Ambon

I will leave you with this video taken in 2014 from the Blue Dragon LOB showing a spectacular eruption.

Author of the book, Spice Islands. Which tells the History, Romance and Adventure of the spice trade from the Moluccas in Eastern Indonesia over a period of 2000 years. Author of the book, East Indies.Which tells the history of the struggle between the Portuguese Crown, the Dutch East India Company and the English East India Company for supremacy in the Eastern Seas. Author of the book 'Archipelago - A Journey Across Indonesia'.
View all posts by ianburnet →
This entry was posted in Uncategorized and tagged east indies, ian burnet, kumba island, ombak putih, pulau kumba, seatrek, spice islands. Bookmark the permalink.