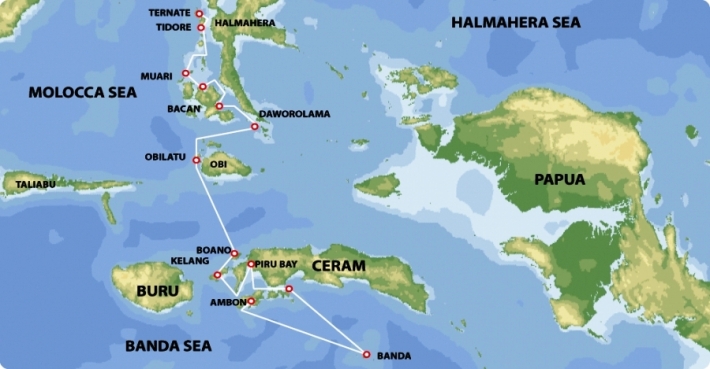 The waters of the Eastern Indonesian Archipelago are some of the clearest in the world, and are perfect for diving and snorkeling. Our program most days was to explore the islands in the morning, back to the boat for a late lunch, and then a few hours snorkeling in the afternoon before sailing to our next destination. I ran a quick survey of our group as to which were the top snorkeling spots and they came up with two – one off Gunung Api (the Fire Mountain) in the Banda Islands, and one off what we all called Lighthouse Island which is near the western end of Ceram.

As recently as 1988 Gunung Api erupted and lava flowed into the sea. Unexpectedly, the coral has rapidly regrown and our group reported some good snorkelling located just off from the blackened lava flow.

We sailed from Saparua through the Haruku Strait to the island of  Manipa which is near Kelang on the map. Here we made a muddy landing ashore and trekked a few kilometres inland to view a traditional ‘factory’ distilling minyak putih or eucalyptus oil from the leaves of the Melaleuca plant. The crushed leaves are boiled in a huge vat over an open fire and the vapour is distilled into the oil, which is used all over Indonesia as a cure for bodily aches and pains.

However, the highlight of the day was our visit to the local school where the teachers in our group had the children practising their English and singing songs.

Lighthouse Island is located near Kelang Island off the west coast of the main island of Ceram and our group described some spectacular snorkeling with plenty of colourful reef fish, in what was a real life tropical aquarium.

This was our last stop before sailing north across the Ceram Sea and to our delight there was enough wind to raise the sails on the Ombak Putih for the first time, as we set our compass course for Obi Island and then Halmahera.

It’s time to do a tour of the ship. Below the main deck are 12 double or twin bed cabins with en-suite bathrooms and air conditioning, and the photo shows a typical cabin.

All of our pre-dinner drinks and delicious meals were taken outside on the front deck, and there was lots of relaxation and reading done on the lounges of the upper rear deck.

Sailing across the Ceram Sea we were joined by numerous dolphins who entertained us as they followed the Ombak Putih. How hard is it to get a picture of a dolphin as it breaches the water? Well Cathy Morrison was able to take this photo.