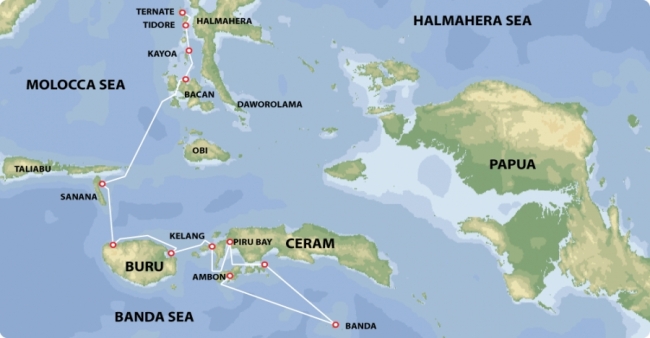 “…. I would dream of the fabled Spice Islands. Images of palm-fringed tropical islands backed by towering volcanoes filled my imagination and I saw myself arriving at the sandy shore by sailing boat, like the explorers, adventurers, traders that had gone before me ……….. My boat was a Bugis phinisi…… “ (from ‘Spice Islands’ , 2011, by Ian Burnet)

The Moluccas (better known as the Spice Islands) have been a magic destination for over 10 centuries. The first seafarers to explore the region, as early as the 8th century, were the Arabs. … In fact, the name Maluku is thought to have been derived from the Arab trader’s term for the region, Jazirat al-Muluk ‘’the island of the kings” and an ancient Arab text places the islands rather precisely “fifteen days sailing east of Java”.
What the Arab traders brought back to their home ports, were exotic spices: cloves, mace and nutmeg. These were sold to Venetian merchants and became known in Europe as “the nuts from Muscat”. Because of the high value of these spices in Europe and the large profits they generated, many adventurers followed in the wake of the Arabs… first Portuguese and later Dutch and British. This thirteen day voyage from Ambon to Ternate Seatrek retraces ‘the marine spice route’ to the fabled sultanate of Ternate.

This itinerary will be enhanced by stories and lectures from the Australian author Ian Burnet who wrote the book Spice Islands in 2011. Ian has spent more than 20 years, living, working and travelling in the Indonesian Archipelago in his professional career as a geologist/geophysicist.
Fascinated by the history of the archipelago, he thought the story of the tiny islands of Ternate and Tidore and their effect on world history had to be told.

On Day 1 when you arrive at the Ambon airport, cars will be waiting to take you to the Ombak Putih at her mooring in the harbour. After you have settled in on the vessel and freshened up, we spend the rest of the day exploring this bustling capital city of the Moluccas. Ambon was built on a hillside overlooking the bay and there are many interesting sites of historical and cultural interest. Among them are the remnants of several old forts built by the Dutch East Indies Company during the heydays of the spice trade. To get a good feel of the local atmosphere, one can crisscross the downtown area in one of the numerous becaks (pedicabs). There are also great markets from which to buy local crafts and produce. In the early afternoon we will make the crossing to the Banda archipelago.

On Day 2, we will first reach the first of the Banda Islands, Run.  An amazing historical footnote is the fact that in 1667, under the Treaty of Breda, this small island was ceded by the English to the Dutch in exchange for Manhattan. After rounding Run we will reach the Island of Ai. Here we go ashore on a beautiful beach to meet with the villagers. A short walk brings us to Fort Revenge which was built by the Dutch after their capture of the island from the English. Behind the fort we find the first nutmeg plantations.  During lunch the vessel will move to the main Island of Bandaneira. With the Ombak Putih tied up to a palm tree on the waterfront, we will spend the afternoon strolling through the old town and get a feel for its incredible history  viewing the  restored planters’ mansions, fortifications and churches. We will find that Fort Belgica was an early blueprint of the Pentagon.  Until today the population is an interesting mix of Malay, Arab, Dutch and Melanesian. At the end of the day we will spend a quiet evening in the lagoon.

On Day 3, we invite the fit and ambitious to first come along for an early morning ascent of the Gunung Api volcano. Tthe reward  to reach the 600 m top of the “Fire Mountain” is more than worth it: a stunning  and unforgettable view  over  the  Banda  Sea, the surrounding  islands  and  the  crater  itself.  In the course of the morning we cross over to visit Lonthor, the largest island in the chain.  On our way out the ‘Sonnegat’ (sun’s gap) between Bandanaira and Gunung Api we hope to be escorted by one or two so-called ‘Kora-Kora’, long sea canoes, rowed by over a dozen muscled men and used in ancient times to attack the invading colonists. In the afternoon the Ombak Putih goes on a Westerly course back towards the island of Ambon.

On Day 4, we arrive in the vicinity of Ambon and pass through the Haruku Strait; explore the Bight of Hitu on the North Coast of Ambon Island, which was a favorite anchorage of the early navigators; and go beach-combing and snorkeling around the islands of Piru Bay (Kasa Island Natural Reserve). Once we round the southwest point of Ceram, we venture north for the Island of Kelang.

On Day 5 at Kelang Island we will go ashore for a trek through small villages, vegetable  gardens  and  tropical  rainforest  all the way to the  top of the island;  we will have a  good chance to encounter wildlife and the view over  the  surrounding  islands and  toward Ceram and Buru is breathtaking.  The coral reefs on the north coast of the island are exceptionally beautiful and we look for a spot to relax and enjoy the beach and water in the afternoon.

On Day 6,  magnificent  scenery  awaits  us  on  Boano  island: towering  cliffs and a ‘karst’ landscape  that  is fringed by white-sand  beaches.  We will use our tenders to explore this beautiful coastline and stop in some of the fishing villages. In the late afternoon the ship takes a northerly course for an overnight passage across the Ceram Sea.

On Day 7, we spend the morning exploring jungle-clad Obi, one of the least populated islands in the archipelago. We’ll drop anchor in a secluded bay and go trekking to an inland lake, a two hour walk through mangroves and rainforest. During lunch we will move to Obilatu; we visit a remote settlement on the north coast or relax on one of the small islets offshore.  In the evening we select a good spot for a BBQ on the beach.
On Day 8, during the night the captain will move the ship Doworalamo Island where we will spend the morning, snorkeling and beach-combing. During lunch we will move to the East Coast of Bacan near Sayoang or Babang from where we will drive across the island to visit the main town of Labuha and the old crumbling Fort Barnewald, originally built by the Portuguese .

On Day 9, we go ashore for an early morning trek from the village of Geti on the north coast of Bacan.  We enter the rain-forest to try to spot some of the endemic  species  of  parrots, cockatoos, lorikeets and perhaps even the elusive cuscus or a  rare black macaque. The afternoon we will spend with exploring the strait between Bacan and Halmahera. It will not be difficult to find some great spots for snorkeling or diving.

On Day 10, once again the ship is underway at sunrise and in the course of the morning we make a stop on Muari Island for snorkeling or a walk ashore to one of the coastal villages. Shortly after noon we cross the equator and enter the northern hemisphere where we reach the Goraici group of islands.  Most of these are the picture post card variety: uninhabited with palm fringed white-sand beaches and crystal clear waters.

On Day 11, early in the morning we will reach the island of Tidore.  While having breakfast, sailing around the North- East coast of Tidore you will have a magnificent view of the perfect cone of the extinct Kiematabu volcano that dominates Tidore.  When we reach the old town of Soa Siu, local vehicles will bring us high on the slope of the volcano to visit some age-old clove plantations. The afternoon we will spend with snorkeling and exploring around one of the adjacent islands.

On Day 12, we reach the island of Ternate our final destination. This old city has been the center of the spice trade for several centuries, where the imprint of the Dutch and the Portuguese can still be seen. Here we will visit the ‘Kedaton’, the palace of the Sultan of Ternate. We hope to attend court-dances in the ‘pendopo’ (covered atrium). If we are lucky we may enjoy the presence of the Sultan and his family. We will be drinking tea and listen to a short introduction of the dances and the history of Ternate. After that we will go back to the boat to say goodbye to captain and crew and transfer awaits to either a hotel or the airport to fly back to Jakarta or Bali.

Participants should be aware that itinerary and program of our sea voyages occasionally may have to be modified, due to factors beyond our control: unfavorable weather conditions, delay in processing harbour clearances, modified schedules of domestic flights. The cruise director and captain of the Vessel will adjust the program accordingly in the best interest of all.

Please note that the domestic flights are not included.

Author of the book, Spice Islands. Which tells the History, Romance and Adventure of the spice trade from the Moluccas in Eastern Indonesia over a period of 2000 years. Author of the book, East Indies.Which tells the history of the struggle between the Portuguese Crown, the Dutch East India Company and the English East India Company for supremacy in the Eastern Seas. Author of the book 'Archipelago - A Journey Across Indonesia'.
View all posts by ianburnet →
This entry was posted in Uncategorized and tagged banda, dutch east indies, ian burnet, maluku, moluccas, ombak putih, seatrekbali, spice islands, ternate, tidore, VOC. Bookmark the permalink.