A fort on this location was built by the Portuguese in the 1500’s and then captured by the first war fleet commissioned by the United Dutch East India Company in 1605 and commanded by Steven van de Hagen. The fort was the first permanent settlement of the VOC in the East Indies and the first three Governor’s-General of the VOC were based here, prior to the establishment of Batavia in 1619.

The first Governor-General was Frederick de Houtman from 1605-1611, who happened to speak fluent Malay as a result of his eighteen month imprisonment by the Sultan of Aceh. A painting of Ambon and a greatly exaggerated Fort Victoria hangs in the Rijksmuseum in Amsterdam with an adjacent cartouche showing an image of Frederick de Houtman. The cartouche that is painted out is where Frederick de Houtman apparently claimed credit for the capture of the fort, credit which belonged to Steven van de Hagen.

The fort was severely damaged by an earthquake in 1754 and rebuilt as Fort Nieuw Victoria. Ambon and its surrounding islands became more important to the VOC as it was here that they concentrated their clove plantations so as to control and monopolize the production of cloves from the Moluccas.
Fort Nieuw Victoria is still a military base so there is no public access and even photography of the outside of the fort is forbidden. When I visited I was able to see a very impressive changing of the guard ceremony (no photographs allowed) and tried to convince the guard on duty if I could take a photograph of the historic entrance, no success until one of the commanding officers came along and said “ok, let that crazy foreigner take his photo, but remember only the entrance”.

Each of the bastions is named and on exploring the outer walls I found Groeningen and Hollandia but could not get access to the others.

Near the northwest bastion I found a plaque with the words Adriana Iohanna (Johanna?) which I assumed to be a name or names, and I was curious as to its significance. 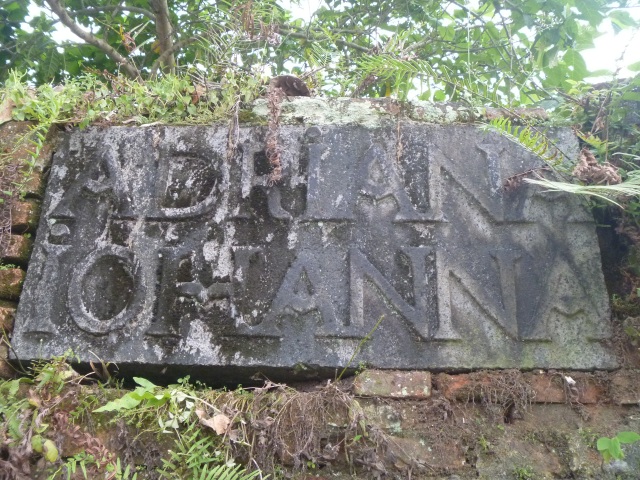 Could this be Adriana de Stuers-de Kock? Her father headed the Dutch contingents that fought against Diponegoros’ armies in the ‘Java Wars’. Adriana was born in Surabaja in 1809, grew up in Batavia, and married her father’s adjudant in 1828. In 1837 her husband was appointed governor of the Moluccas. Unfortunately the ship carrying the new governor and his family founded on a coral reef on route to Ambon. Here the 140 passengers and crew including Adriana, who was now expecting her fifth child, managed to survive by clinging to the reef and the wreck. After four weeks of this ordeal they were finally rescued and brought to Ambon.

Is this the same Adriana on the plaque or somebody else? My thanks to Abe Smits a voyager on our 2014 Spice Routes/Spice Wars sailing adventure who brought the name of Adriana Johanna Bake to my attention.

It now seems more likely that the plaque is for Adriana Johanna Bake who was born in Ambon in 1724 and married in 1743 in Batavia to Petrus Albertus van Parra who became Governor-General of the East Indies in 1761, and for whom an inscription is seen on the entrance to the fort. Of course we still need to know the significance of the plaque in her name, but we can imagine her visiting the town of her birth and newly rebuilt Fort with her husband the Governor-General and being honoured in this way. 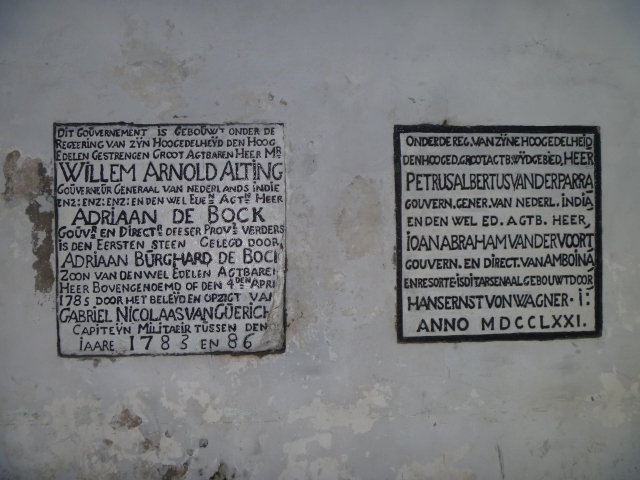