The Greatest Monument in the World – Borobodur 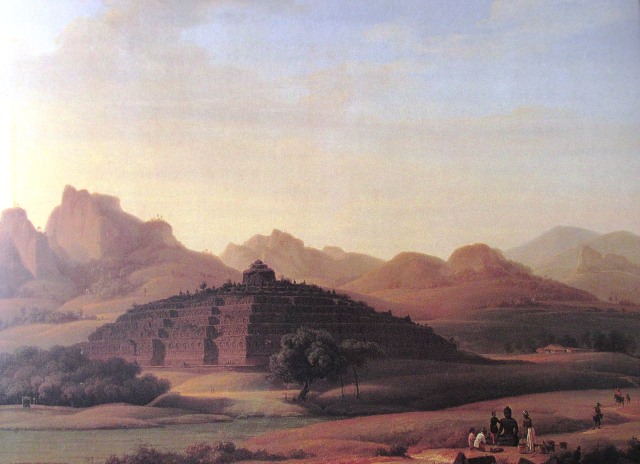 It was Sir Stamford Raffles who receives credit for ‘rediscovering’ Borobodur during the period of British rule in Java from 1811-1816 and information about this monumental work of art came as a great surprise to the outside world. After being cleared of the jungle that had hidden its secrets for a centuries, Raffles writes in his book ‘The History of Java’ of his experience when first viewing the Borobodur:

No description in writing can convey the amount of work that has gone into this immense monument and the detail of its story carved in stone. Its grandeur is too vast and overwhelming, and it compares to no other monument in the world … The amount of human labour and skill expended on the Great Pyramids of Egypt sinks into insignificance when compared to that required to complete this sculptured hill temple in the interior of Java.

I agree that Borobodur is the greatest monument in the world and I am astounded that an internet search will list the pyramids amongst the top ten historic monuments and yet not include Borobodur. There is even a recent television documentary entitled ‘Seven Wonders of the Buddhist World’, that does not include the Borobodur Monument.

I hope to reach some level of spiritual enlightenment by joining a dozen other dedicated pilgrims at 5am to experience the sunrise from the top of Borobodur. The night is black and silent as we enter the great monument and the moonlight casts mystical shadows around the temple. Protecting us from these shadows our torches light the way as we climb directly up the stairs that lead to the top of the monument. I stop to rest at one of the carved gateways that lead from one level to the next and my torch reveals above the gateway, the fearsome features of a Kala Head. In Javanese mythology Batara Kala is the god of death or destruction and I remember this warning as I climb to the upper terraces.

Knowing that the sun has risen over Borobodur for more than a thousand years is awe-inspiring. I assume the same position as the 72 Buddha’s on the uppermost terraces, legs crossed, hands posed, waiting in silent contemplation for the dawning of the new day. Slowly, very slowly, the black of the night is replaced by a deep blue light. I have never experienced this light before and it seems to last for a long time before slowly changing to a sky blue and then an early morning grey daylight. Soon the red disc of the sun appears revealing the blue profiles of the surrounding volcanoes, the blue grey of the distant hills, the dark green of the forests high on the hillsides, the bright green of the terraced rice fields, and the white morning mist that fills the lowest parts of the valleys.

The first light of dawn over Borobodur

An excerpt from Archipelago – A Journey Across Indonesia to be published September 1.

Indonesia is the world’s largest archipelago nation comprising as many as 17,000 islands spread over the same distance as Los Angeles to New York, or Perth to Sydney. Indonesia is also the most culturally diverse nation on the planet and its national motto had to be ‘Unity in Diversity’ as these islands are an extraordinary mixture of races, religions, languages and cultures.
Ian Burnet sets out on a journey across the archipelago to discover this rich cultural diversity. He describes how the early Malay people came to these islands and the influence of the Indian religions of Hinduism and Buddhism on the islands of Sumatra, Java and Bali. He discovers the heritage of the Indians, Chinese and Arabs who came here to trade in spices and sandalwood, he follows the rise of Islam and the traces of the first Europeans to enter Asia – particularly the early Portuguese traders and the priests who brought Christianity to these lands.
Travelling by bus, plane, train, ferry, boat, car and motorcycle from Java to Timor, he hops from island to island across the Indonesian archipelago, following the smoking volcanoes that form its spine.
Ian Burnet combines his love of adventure and travel with his knowledge of history to take us on a personal journey through geographic space and historical time, which will delight all armchair travellers.

Archipelago – A Journey Across Indonesia

3 Responses to The Greatest Monument in the World – Borobodur