Posted on September 8, 2016 by ianburnet

One of the many highlights of our recent ‘Journey Across Java’ was a visit to the Candi Sari temple near Prambanan. It is quite unusual for Javanese temples as it also provided accomodation for the Buddhist monks and served as a monastery. The Sari temple entrance faces east, above the entrance is a kala head and below is a stone carving of a man riding an elephant.Historians believe the temple might have served as accomodation for those priests serving in the nearby Kalasan temple, whch has been dated to 778 AD. 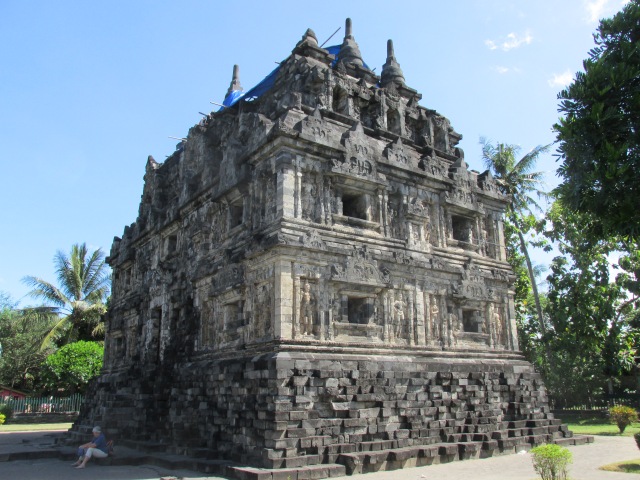 Inside the temple there are three chambers that filled the building, each connected with the door between its walls.The statuary inside the temple is now missing, but there are niches in the north and south walls decorated with a kala makara.

The temple is built on two levels with the three rooms for prayer on the lower level and accomodation for the monks on the upper level. Above your head you can see where the beams supporting the upper floor slotted into the stone work and on the south floor is some angled carved stone indicating where the wooden stairs went up to the next level.

On the outside of the rectangular temple, are carved statues placed into two rows between the windows. There are a total of 38 Bodhisattvas divided into eight on the east side, eight on the north side, eight on the south side and 14 on the west side. Commonly holding the red and blue lotus, all the statues are in graceful attitude of tribhangga and some are playing musical instruments. On the right and left of the Bodhisattvas are small windows showing carved kinari kinara— creatures from heaven which are half-human and half bird. Above the temple each side of the roof line was originally crowned with three stupas 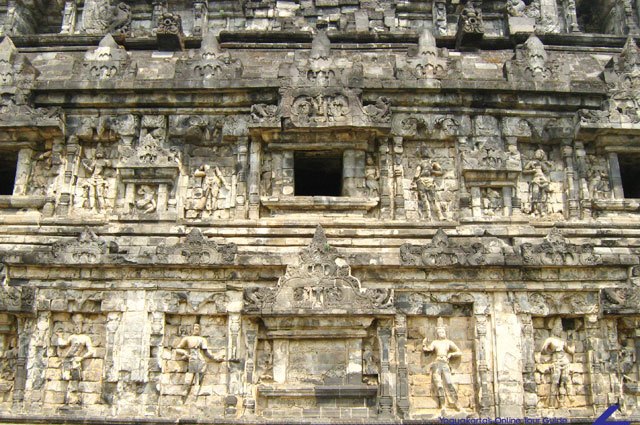 An image from the files of the Tropenmuseum in Holland shows how  the Candi Sari temple looked in 1901 before it’s restoration.