Batavia and the Dutch Golden Age

The exhibition Rembrandt and the Dutch Golden Age: Masterpieces from the Rijksmuseum, is on display at the Art Gallery NSW until 18 February.

The United East India Company (VOC), one of the world’s first joint stock companies, was founded in 1602 and held a state monopoly over trade with the Far East. It was the riches of Indonesian spices, Chinese silks and porcelains, Indian textiles, Japanese silver and other Asian trade goods that brought huge profits to the Dutch Republic and its shareholders. A period of unprecedented prosperity dawned for the young Republic, which was to go down in history as the golden age, and a thriving commercial class created a demand for paintings of real life. 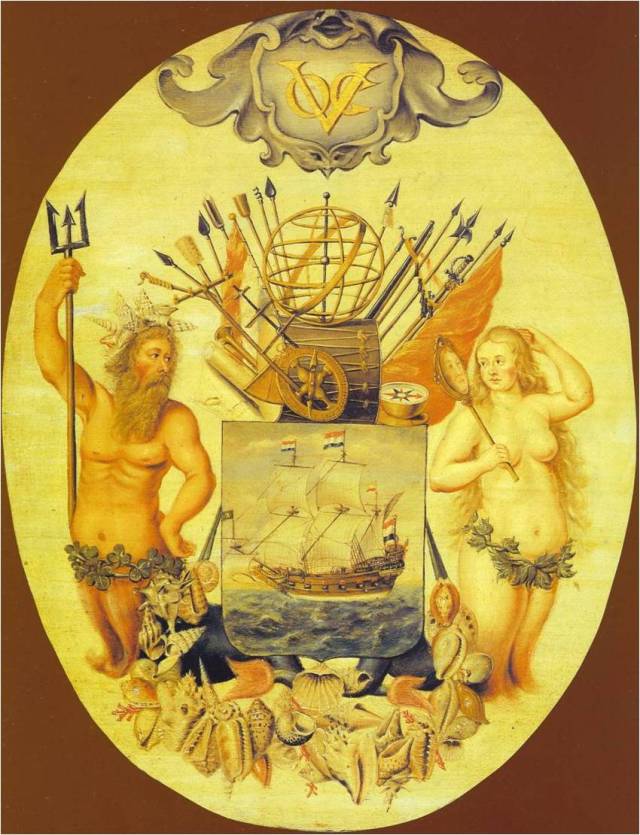 VOC emblem showing King Neptune and his consort with a Dutch trading ship in the centre.

The Republic of the Seven United Provinces, or the Dutch Republic, was a home to a vast number of prodigious artists who recorded the world around them and of their patrons,  with unprecedented realism. It was the wealth coming from the VOC and the East Indies, and the profits which flowed into private homes that financed much of this art.

We are fortunate that the first part of this exhibition – Across the Oceans – portrays some of the ships, ports and people of the VOC in Amsterdam and particularly in Batavia (today’s Jakarta and the capital of the Republic of Indonesia).

This scene shows passengers and goods arriving and departing from the Mussel Pier on the busy estuary in front of Amsterdam. From here voyagers would sail to the Textel to join the big EastIndiaman trading ships that would make the long voyage to the East Indies. 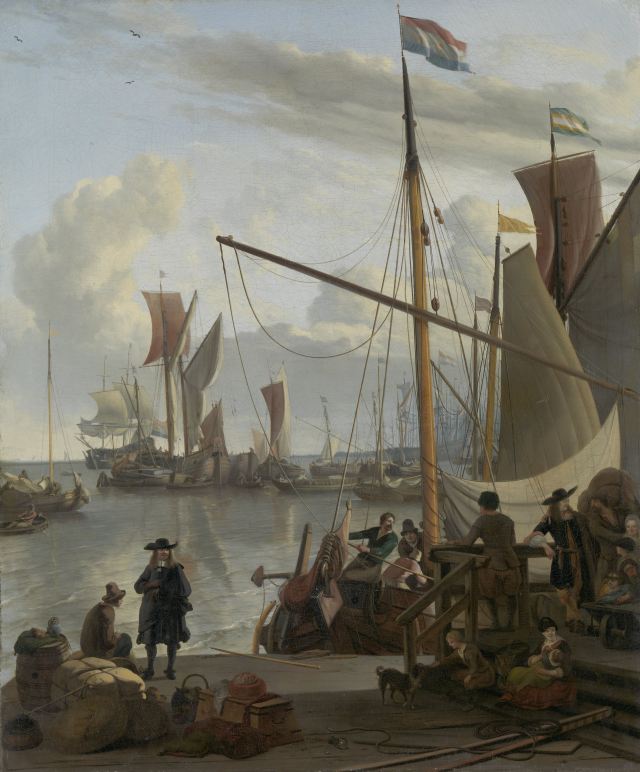 The Ij at Amsterdam, seen from the Mosselsteiger (Ludolf Bakhuizen, 1673, Rijksmuseum)

It was Batavia, founded in 1619, that became the centre of the vast trading empire established by the VOC over Asia and the Orient. This painting of Batavia, only thirty years after it was established, shows how it was built like a Dutch port city with Kasteel Batavia and the Spice Warehouses to the left and right of the main canal which allowed direct acess from the sea into the city. The spice warehouses still exist today as part of Museum Bahari or the Maritime Museum. Offshore are smaller vessels bringing spices and other trade goods from across the archipelago into the warehouses and the large EastIndiamen preparing to bring these valuable goods back to the United Provinces.

We are fortunate to have this marvellous painting of the town of Batavia from around the same time period.  Andries Beekman lived in Batavia as a VOC soldier and so this painting is based on sketches from real life. It shows the formidable Kasteel Batavia, the adjacent main canal, and the daily life of the people who lived in this trading port as they gather around an outdoor market . This painting was commissioned by the Amsterdam chamber of the VOC and was hung in the Company’s boardroom. 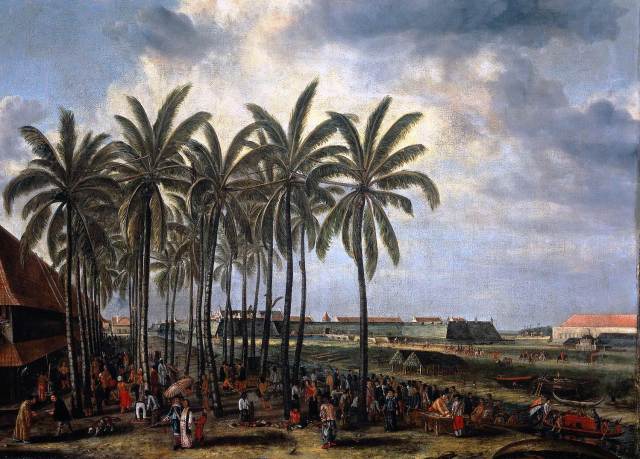 Detail of the painting show a Chinese woman and man greeting each other. 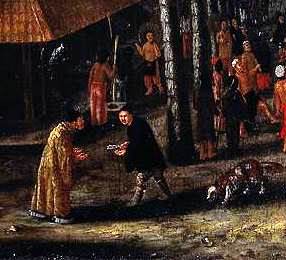 A Dutch merchant taking a stroll with his Eurasian wife, accompanied by a servant, and with the orang Betawi (the local inhabitants of Batavia) and what looks like an Arab trader dressed in white, in the background. 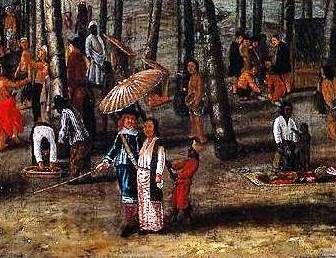 In the foreground a freed Portuguese mezisto slave,  known as Mardjikers (freedman) they mainly worked as clerks and other menial positions for the VOC. In the background are the local orang Betawi and some Dutch merchants. 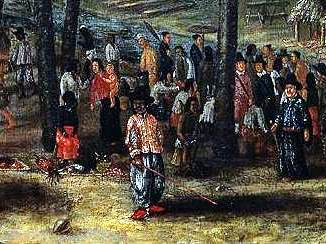 A market table with people selling foodstuffs? Possibly Chinese? Does anyone recognise this characteristic dress? 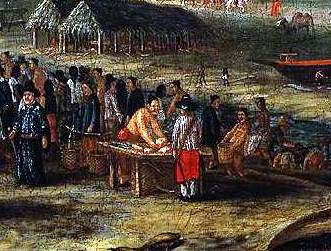 During this era of unparalleled wealth, power and cultural confidence, the art of painting flourished like never before. Wealthy merchants and important officials were able to enhance their prestige by commissioning works of art, often of themselves, their new lifestyle, of maritime trade and scenes from every-day life.

This painting shows an unknown VOC merchant and his wife being shaded by a servant with an umbrella. They are standing on a real or imagined island off Batavia with  the port city in the background and pointing to the fleet of VOC EastIndiamen preparing to return to the Netherlands. It is thought that it could be either Barent Pietersz Grotebroek or Jacob Martensen who were the commanders of one of the vessels. 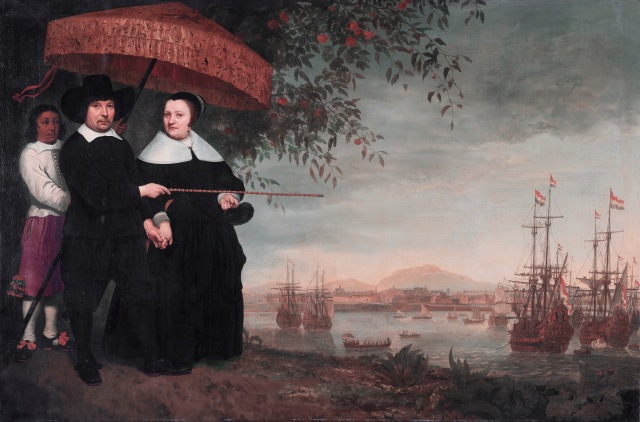 A VOC merchant and his wife outside Batavia  (Aelbert Cuyp, c1650, Rijksmuseum)

This painting is of a VOC Director-General, Gerard Pieters Hulft, before his departure on the long sea journey to Batavia. The painting is as if looking through a porthole with the sea in the background and he is surrounded by artifacts expressing his interests, in books, manuscripts, navigation instruments, charts, a globe, trade documents and more books.  In the foreground is a caterpillar and moth and these words written in Latin on a white sheet of paper- ‘nothing was ever so unlike itself’, which is thought to refer to his rise from a humble town clerk to a Director-General of the most powerful company in the world.

Fortunately, he can now be remembered by this painting because he did not survive much longer than a year in the East Indies and was shot dead in an attack on the Portuguese held city of Columbo in Sri Lanka in 1656.