In 1623, the Dutch East India Company sent Jan Carstensz and the vessel Pera on the second expedition to explore the south-land after the 1606 voyage of Willem Jansz and the Duyfken to the Cape York Peninsula.

As a result of the continuing collision of Australia with Asia, the Papuan mountains have been thrust up to 5000 metres above sea level and are almost continuously covered in cloud. However, while sailing along the south coast of Papua, the clouds suddenly parted and the crew of the Pera saw the most amazing sight. It was what Jan Carstensz described as a sneebergh and what we would call a glacier:

‘At a distance of about 10 miljen by estimation into the interior we saw a very high mountain range in many places white with snow, which we thought a very singular sight, being so near the equator’.

His report probably caused some amusement in Batavia, because who had ever heard of a glacier formed in the tropics and just a few degrees south of the equator? However his sighting was duly recorded on the 1641 map by Hendrick Hondius showing the results of the Pera expedition.

As a result of global warming, the glacier has been rapidly shrinking as shown in these photographs. 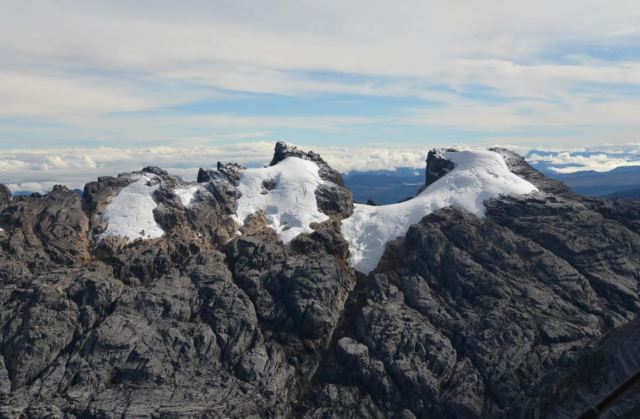 Unfortunately, it has been predicted that by this year, 2018, the glacier may completely disappear and later generations will never believe there was a tropical glacier in Indonesia and just north of Australia.