Art and science join forces in the Portuguese atlas known as the Atlas Miller by the cartographers Lopo Homem, Pedro Reinel, Jorge Reinel and the miniaturist António de Holanda, which is one of the wonders of sixteenth-century Portuguese cartography. The Atlas was created for the Portuguese King Manuel and was intended to display the wealth and power that Portugal had derived from its discoveries in Africa, India, South East Asia and the lands it had claimed.

Based on the map by  the Greek geographer Claudius Ptolemy from the second century AD of the known world, the planisphere of the Atlas Miller shows the Atlantic and Indian Oceans bounded by land.

This masterpiece of geographic art portrays the known world before the departure of Ferdinand Magellan and his Armada de Moluccas, 500 years ago in 1519. This map of the world changed forever after the Armada de Moluccas found their way through the Strait of Magellan and then across the vast Pacific Ocean before they reached the Spice Islands in 1521.This voyage would become the greatest voyage in maritime history when the vessel Victoria captained by Juan Sebastian Elcano completed the first circumnavigation of the globe in 1522.

Alfonso de Albuquerque aided by his Portuguese and Malabari forces had captured the strategic Asian city of Malacca in 1511 and the geographical depiction of the Malay Peninsula, Sumatra and the Riau Islands south of Singapore from the Atlas Miller are reasonably accurate even though the artistic illuminations by António de Holanda show the fantastic. 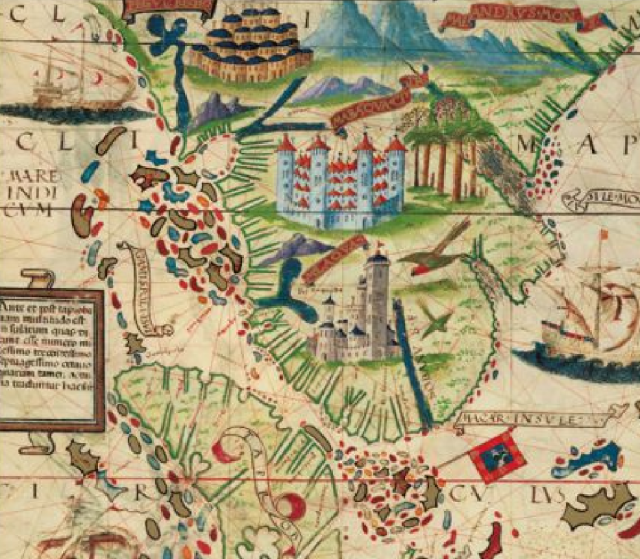 Only a few months after the capture of Malacca, three Portuguese ships under the command of Antonio de Abreu sailed eastwards towards the Spice Islands. The small fleet comprised the flagship Santa Caterina, the Sabaia captained by Francisco Serrao and an unamed caravel captained by Alfonso Bisagudo. They were a crew of 120 including 60 Malays and Javanese, their pilot Nhahkoda Ishmael who was familiar with the trading route to the Spice Islands and Francisco Rodrigues the Portuguese pilot who chronicled their voyage. The fleet reached the tiny nutmeg islands of Banda, Api, Lontar, Ai and Run all of which are mere specks in the Banda Sea. It was after being shipwrecked on the return voyage that Francisco Serrao and his comrades were taken north to the clove islands of Ternate, Tidore, Moti, Machian and Bachan. 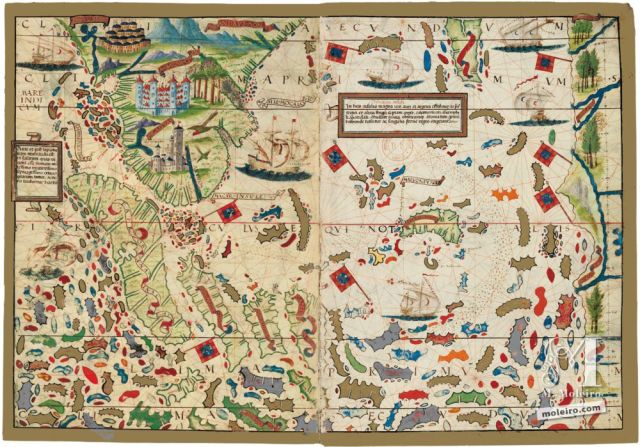 The Malay Peninsula, Sumatra, Java and the islands of Eastern Indonesia from the Atlas Miller

The map of the Spice Islands from the Atlas Miller shows a mass of speculative islands however the one that shows some geographical accuracy are what appear to be the Banda islands as mapped by Francisco Rodrigues and showing the Portuguese flag .

The Banda islands from the Atlas Miller

The chronicle and maps made by Francisco Rodrigues of the first Portuguese voyage to the Spice Islands in 1512 were lost to history until copies were discovered in 1937 in the archives of the Bibliotheque de l’Assemblee Nationale de France. Below is his more accurate depiction of the Banda islands.

The Banda islands by Francisco Rodrigues 1512

At the top of the map of the Spice Islands in the Atlas Miller there appears to be a depiction of the clove islands of Ternate, Tidore, Moti, Machian and Bachan off the coast of Halmahera and these are probably derived by the Portuguese from either Francisco Serrao or Malay/Javanese maps of the period.

Depiction of the clove islands from the Atlas Miller

For the complete story of the European discovery of the Spice Islands and the history, romance and adventure of the spice trade over 2000 years, please order the book Spice Islands from your favorite bookstore or online retailer as a paperback or e-book.