Heritage Destinations will be repeating our ‘Journey Across Java’ tour for 15 days from August 18 until September 1, 2017. I thought these vintage Dutch travel posters that follow our journey would be of interest.

We will travel most of the way from Jakarta (Batavia) to Bandung (Bandoeng), to Yogyakarta (Djokjakarta), to Solo (Soerakarta)  to Surabaya (Soerabaja) by train. But there is no reason to take the night train as we want to be able to see the beautiful mountains, terraced rice fields and lakes of Java as we travel the distance from Jakarta to Surabaya.

This poster must have been designed to attract a particular type of traveller – the overweight Dutch colonial male whose hat is too big! After we leave Jakarta our train slowly climbs 800 metres up through the mountains of West Java on our journey to Bandung and we see wonderful views of terraced rice fields and distant mountains.  We also pass 100m above the  Cisomang River, on the modern equivalent of the trestle bridge in the poster.

And this poster is for a more sophisticated traveller – those interested in the art, dance, music and culture of Indonesia.

Humidity recedes, gradually replaced by cool, fresh air as we steadily climb up to the broad plateau containing Bandung. Once described as ‘the Paris of Java’, in Bandung we will stay in the renovated and historic Grand Hotel Preanger with its art-deco architecture and decor.

We journey from Bandung to Yogjakarta by train  and as we roll through the sculptured rice terraces, rich cultivated lands and mountains of West Java, the views from the train demonstrate the beauty of the people, the wonderland of colour and the beautiful smiles that can be seen across Java. 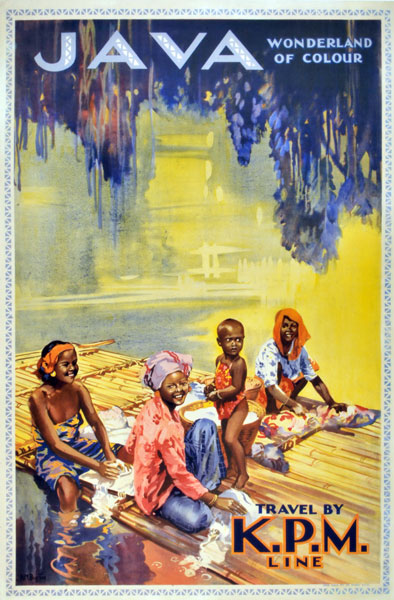 In Central Java we will spend three days exploring Jogjakarta and the highlight of the tour will be our visit to the magnificent Borobodur Monument which is the largest Buddhist sanctuary in the world. A colossal cosmic mountain built from one million blocks of stone the monument took perhaps 10,000 artisans a century to build. After a catyclismic eruption of the nearby Mount Merapi it lay buried for almost 1000 years under layers of volcanic ash and vegetation until its rediscovery in 1814.

On our journey to Solo in Central Java we will visit the massive Prambanan Temple complex which consists of 244 temples and is dominated by three main temples dedicated to the three highest gods of Hinduism – Brahma the Creator, Vishnu the Keeper, and Shiva the Destroyer. 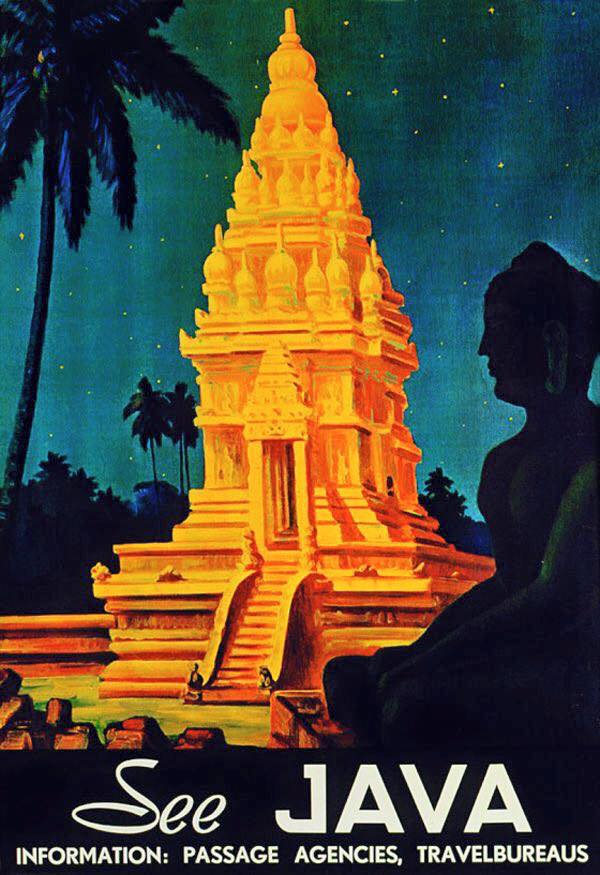 After three days exploring Solo, we will travel by train to Trowulan in East Java to visit to the remains of the royal city of the 14th century Majapahit Empire.The ancient capital was surrounded by a high red brick wall with deep pools, palaces, temples and pavilions. The impressive Trowulan Museum helps put the site into perspective before we visit the remnants of the historic city.

We travel on to Surabaya and where we will stay two nights at the renowned Majapahit Hotel (originally the Hotel Oranje). As one of the three great hotels of Asia built by the Sarkie brothers, it is even bigger and more magnificent than its sister hotels – the Raffles in Singapore and the Eastern and Oriental Hotel in Penang.

For those interested in the details of the tour, please go to the Heritage Destinations website below: