The British naturalist Alfred Russel Wallace was the greatest of all archipelago travellers in his search for rare and exotic natural history specimens to send back from eastern Indonesia to collectors in Britain.

Macassan traders made annual voyages to the Aru Islands in the eastern extremity of the Indonesian archipelago to collect pearl shell, trepang or dried sea slug, and most importantly – bird of paradise skins. For collectors, a bird of paradise specimen was worth more than any other bird on the planet and their skins were traded across the world from Macassar. From here it was a thousand mile voyage in a native boat, the Bugis prahu, a boat which had made the Macassan traders famous on their annual voyages to the eastern islands and as far south as Arnhem Land in Australia to collect trepang for the Chinese markets. 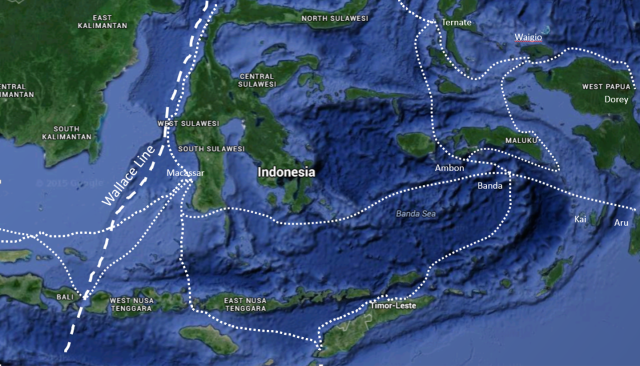 For Alfred Russel Wallace, it was the lure of the bird of paradise that had brought him to the archipelago in the first place and here was an opportunity to reach their distant lands. Despite his trepidation it was a lure he could not resist:

When I found that I really could do so now, had I but the courage to trust myself for a thousand miles voyage in a Bugis prau, and then for six or seven months among lawless traders and ferocious savages. I felt somewhat as I did as a schoolboy.

Wallace brought with him an eight month supply of necessities – sugar, coffee, tea, a keg of butter, sixteen flasks of oil, cooking utensils, lamps and candles as well as luxuries such as a dozen bottles of wine and some beer. His hunting and collecting supplies consisted of guns, bags of shot, gunpowder, insect boxes, pins, preserving alcohol, as well as tobacco, beads and parang (machetes) for trading. Despite his initial trepidation when first contemplating this voyage, Wallace declared that he had never, either before or since, made a twenty day voyage so pleasantly, or with so little discomfort and he wrote:

I was much delighted with the trip, and was inclined to rate the luxuries of the semi-barbarous prahu as surpassing those of the most magnificent screw-steamer, that highest result of our civilisation. 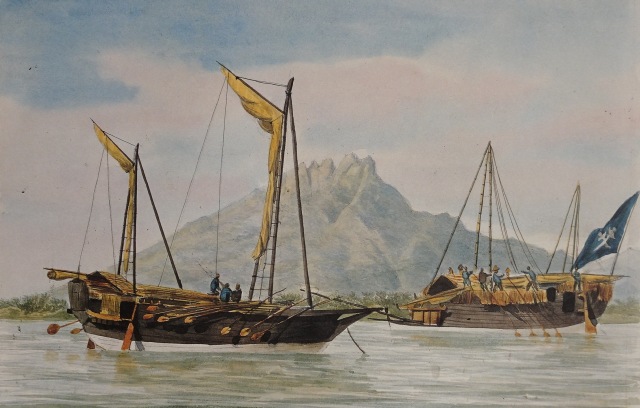 There was no Dutch colonial presence on these remote islands and Wallace was the only white man in the settlement. For obvious reasons he became a curiosity and he describes his many visits from the locals:

This was the first time a real white man had come among them, and, they said, “You see how the people come every day from the villages around to look at you”, This was very flattering, and accounted for the great concourse of visitors which I had at first imagined was accidental. A few years before I had been one of the gazers at the Zulus and the Aztecs in London. Now the tables were turned on me, for I was to these people a new and strange variety of man, and I had the honour of affording to them, in my own person, an attractive exhibition. 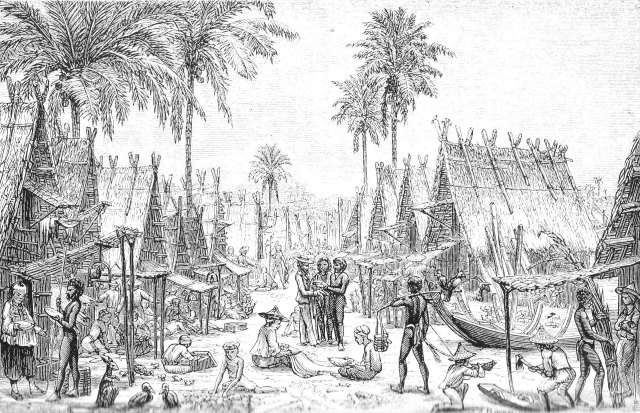 Aru Island had always been part of the Australian-New Guinea continent and Wallace noted the presence on Aru of marsupials such as the Aru Wallaby seen in the bottom left of this picture along with Australian scrub turkeys, which led to his conclusion that Australia had collided with Asia.

It was months later that Wallace was able to see the Great Bird of Paradise in full plumage with its long trains of silky feathers. Lying in his hut before dawn he awoke to their cries as they went to seek their breakfast. The mating season had begun and he observed their extravagant ‘dance parties’, conducted to win the watching female birds. As they danced, the males raised their tails into magnificent golden fans, shook these quivering fans, and then froze like an open flower, before quivering again. Wallace was the first European to see the elaborate courtship dances of these birds, he now knew that the Bird of Paradise really deserves its name and must be ranked as one of the most beautiful and most wonderful of all living things.

2 Responses to Alfred Russel Wallace – The voyage to Aru