Don’t be confused by the title. Ian Burnet’s latest book, Where Australia Collides with Asia is not about the clash of civilizations. 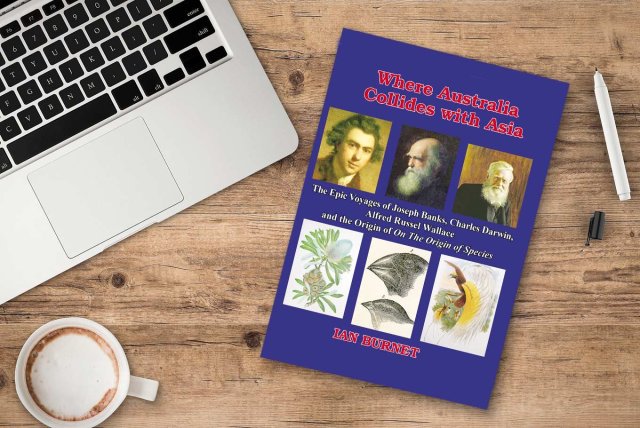 It is the story of how continental drift has created the world in which we live, and, in particular, the unique and fascinating archipelago of Indonesia, a string of islands which spans Asia and Australasia, a volatile and diverse region.

The books is also a wonderful retelling of the tales of three great British naturalists: Joseph Banks who charted the east coast of Australia with Cook; Charles Darwin, whose youthful voyages on the Beagle changed our understanding of the world, and the lesser-known Alfred Russel Wallace, whose wanderings across what is now the Indonesian archipelago, led to his own theory of natural selection.

In Spice Islands, Burnet hones in on the rivalry between the Sultans of Ternate and Tidore and their turbulent relationships with the Portuguese, Dutch and English. And, in Archipelago, A journey across Indonesia, he takes us on a trip across the archipelago to discover the rich cultural diversity of Indonesia.

Ian Burnet is a natural story teller. After 30 years living, working and travelling in Indonesia, he knows his stuff. In the richly illustrated Where Australia Collides with Asia we accompany Joseph Banks on his voyage of discovery with James Cook, sharing in his excitement as he collects and documents the curious plant and animal species he encounters in Australia.

We meet a young Charles Darwin, galloping across the Argentinian pampas, ‘shooting, riding, collecting and looking forward to a few revolutions’. Accompanied by his man, Syms Covington, a ‘fiddler and boy to the poop cabin’, Darwin took the opportunity to explore the coastal regions of South America where he puzzled about the presence of fossil marine shells four-thousand metres above sea level on the Andes. “I felt glad I was by myself,” he wrote of his experience of the grandeur of the Andes, “it was like watching a thunderstorm, or hearing in the full Orchestra a chorus of the Messiah”.

We also meet Alfred Russel Wallace, Darwin’s junior and ardent admirer. After spending more than two years exploring the Amazon, the young naturalist was lucky to escape with his life, when the brig on which he was returning to England caught fire and sunk, along with all his notes, sketches and the entire collection of specimens that was to fund the trip.

Wallace’s fortitude and humility shine through as the story unfolds. Undaunted by this devastating loss, he picks himself up and returns to the field two years later, this time to the Malay archipelago.

Back in England, for 20 years Darwin had been developing his theory. An unpublished essay in a locked drawer was the only evidence that, he in fact, was the first to propose the theory of natural selection. Unwell and anxious about the impact his theory would have, aware of the likely backlash and damage to his family and his reputation, the pain it would cause his wife, who was a committed Christian, he had put off publishing.

Meanwhile, in the steamy jungles and remote islands of what is now eastern Indonesia, Wallace finally arrived at the same conclusion. Individual species of plants and animals were not created by God in a single act of creation, but, rather, evolved gradually over time, the key principle being ‘the survival of the fittest’.

Having failed to generate any interest from an initial published paper, Wallace decided to write directly to Darwin. The older man was prompted to present a pair of articles to the elite Linnean Society in London in July 1857.

Was Wallace robbed of his rightful place as the author of the theory of evolution? Did Darwin and his friends conspire to ensure that the older scientist got the glory; to sideline a social inferior? Or is this a story of gentlemanly conduct and scientific collaboration?

As Burnet’s book explains, Darwin certainly arrived at the same conclusions as Wallace many years in advance. He just hadn’t had the temerity to publish. And following the publication and Wallace’s eventual return to England, the two men became friends and remained so until the end.

What stands out in Burnet’s tale is the immediacy of this history. The characters that Burnet portrays in this book are not so different from you and me.

Away from the confines of a dusty school textbook, Banks, Darwin and Wallace are brought to life. Here we get to know them as flesh and blood, subject to the same social pressures as are we; the same excitements and disappointments, arguments and friendships, loves and jealousies, seasickness, hangovers, fevers … and bright mornings when, as Darwin describes his time in Argentina, he had the “sky for a roof and the ground for a table”.

At the same time, Burnet’s backstory is the immensity of the planet’s geographic and biological history. And, consequently, our own fragility as a species.

Perhaps we can find parallels between Darwin’s reluctance to challenge religious authority and today’s debates over climate change, the reluctance of vested interests to accept the weight of scientific evidence for humanity’s impact on climate.

The writing is a robust; no-nonsense. It is the writing of a man who means business, and it builds trust. The story is light and entertaining yet full of insight. Through the frequent use of excerpts from Banks, Darwin and Wallace’s own writing, we get to see the world through their eyes. And through this, we get occasional glimpses of a wry, understated humour.

These were men of the world; artists, writers, scientists, adventurers, seafarers. It raises the question, where are these men and women today? After reading this book I am inclined to answer that Ian Burnet may be one of them – a scientist, an historian, a traveller and a fine writer.