Russell Darnley seeks to cover an extensive time span in his book Seen and Unseen: a century of stories from Asia and the Pacific. 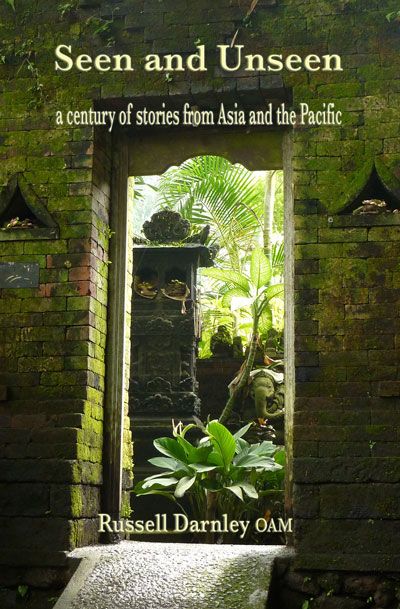 I have read it as a memoir written as 29 stories, beginning when he was a boy growing up in Coogee in Sydney, Australia. Here, his stories begin with him exploring the headlands and rock pools around this beachside suburb with his grandfather.  They delve into the early years of the 20th century and then on to descriptions of his childhood, family and friends.

He tells stories of his student days at Sydney University and of his first travels through South East Asia in the 1970’s. I can identify with this period as we would have travelled around the same time to Singapore, Malacca, Kuala Lumpur and Penang. A period when many young Australian backpackers were on the road discovering South East Asia.

Years later in 1984, Russel is involved in setting up Asian Field Study Centres for Australian students in Bali. It is here that he first becomes aware of the interplay of the ‘Seen and the Unseen’ and begins to realise that it has always formed part of his life. Here, in Bali, he experiences just how the Balinese are immersed in both a physical and a spiritual world, and some practice ‘black magic’ as well.

Returning to Indonesia in 1999 to deliver workshops for teachers whose students are studying Australia meant he happened to be in Surabaya and Jakarta during the tremendous outburst of joy and energy of the nation’s youth, after 35 years of suppression under Suharto’s military dictatorship. He is present in the middle of the excited masses and vividly describes the political campaigning for the first democratic elections after this long period.

Russell’s description of his response to the 2002 Bali bombing in the immediate aftermath of this tragedy and his volunteer work in aiding the victims and their families at the Sanglah Hospital, must be highlight of his book (if that is the right word). Personally, I had to pause several times to recover my emotions while reading his descriptions of these traumatic events.

Seen and Unseen concludes where it starts with the now elder Russell in conversation with his long-departed grandfather around the headland of Coogee, while trying to understand his life experiences and the significance of the seen and unseen.

The strength of Russell Darnley’s writing is his ability to position himself as an observant outsider. Central to his work is the idea that interactions with people from cultures other than our own, in particular those of Asia, allow us to challenge many of our own assumptions. His engaging memoir will be a ‘must read’ by all those who have an interest in Asia and wish to follow his footsteps.