Pulau Onrust is an island in Jakarta Bay that was developed by the Dutch East India Company (VOC) as a shipyard to repair their ships. Consequently it housed a permanent staff of artisans such as carpenters, sailmakers, ropemakers etc.etc.

Map of Batavia Bay by Johan Nieuhof, 1682. Onrust is one of the group of four islands on the west.

The VOC constructed a small rectangular fort with two bastions in 1656 which was then enlarged in 1671 to gave it an asymmetrical pentagonal shape with a bastion in each corner. The whole structure was made of red bricks and coral, and in 1674 additional storage buildings were built.

Plan of Onrust Island showing the fort,its bastions and workshops built in 1671 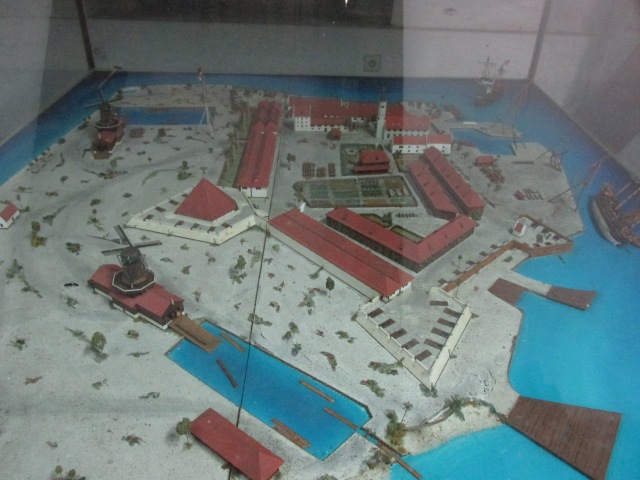 It was here on Onrust in 1770 that Captain Cook’s HMB Endeavour was repaired after it had run aground on the Great Barrier Reef off Queensland, Australia. It was also where seven of the crew died of malaria or cholera before they left Batavia in what Cook describes ‘as in the condition of a hospital ship’ and seventeen more crew died before they reached Capetown.

In 1795, the position of the Dutch in Batavia became quite uncertain due to the war in Europe, and the situation became worse with the appearance in 1800 of a British naval squadron which seized five Dutch armed vessels and destroyed 22 other vessels in the bay. Onrust island became under siege by the British and eventually destroyed. After the British departed, the Dutch rebuilt the buildings and facilities, completing the work in 1806. However, a second British attack destroyed the fort again when the British occupied Batavia in 1810.

Onrust island was subsequently used as a quarantine centre, a prison for serious criminals, mutineers and political exiles, and then a leperosorium. Today all that is left from its VOC history is a small but excellent museum, a rusty cannon and the Dutch cemetery.