1901        Under the aegis of what became known as the ‘Ethical Policy’ the Dutch Government slowly began to extend opportunities, to the children of the Indonesian elite to attend Dutch language primary and secondary schools. The best of the young Indonesian graduates were to continue their studies in the Netherlands.

1908        Perhimpoenan Indonesia (The Indonesian Association)  was founded by the Indonesian students in the Netherlands. It was important because it was one of the first organisation to campaign for full independence for Indonesia from the Netherlands (and to use the term Indonesia). Many of the P.I students, such as Mohammed Hatta, would later acquire prominent political positions in the independent Indonesia. 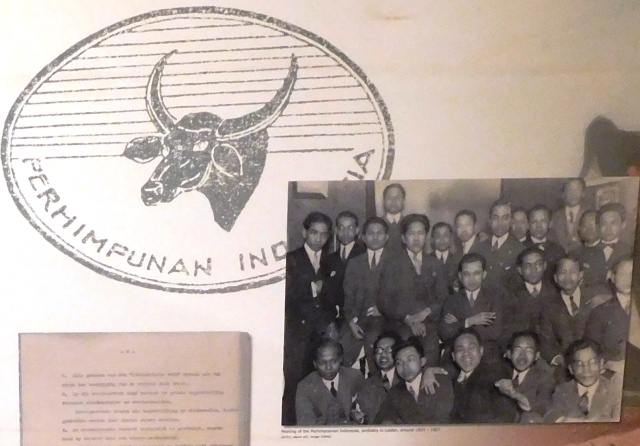 A meeting of Perhimpoenan Indonesia probably in Leiden around 1924

1908       The Doctor Djawa School was the first advanced educational institute in the Indies for Indonesians. Dr. Wahidin Sudirhusodo and Dr. Raden Soetomo and their colleagues founded Budi Utomo (Prime Philosophy) which would focus on improving the social, economic and cultural welfare of the Javanese people. Overtime, the organisation also demanded parliamentary rights and autonomy for the Indonesian people.

The Dokter-Djawa School in Batavia 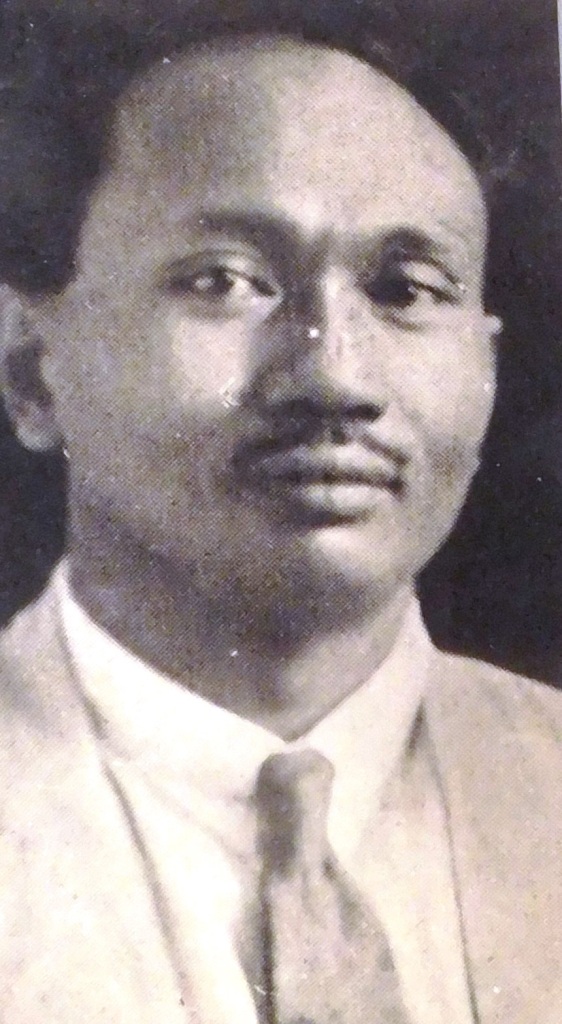 Dr. Raden Soetomo, one of the founders of Budi Utomo

1909        Muslim merchants formed the Islamic Traders Association to adance their economic interests compared to the Chinese merchants in Java. In 1912 this group became Sarekat Islam (The Islamic Union) under the leadership of R. Oemar Said Tjokroaminoto and from 1915 H. Agus Salim. Increasingly the outward religious emphasis of the organisation yielded place to a political one. 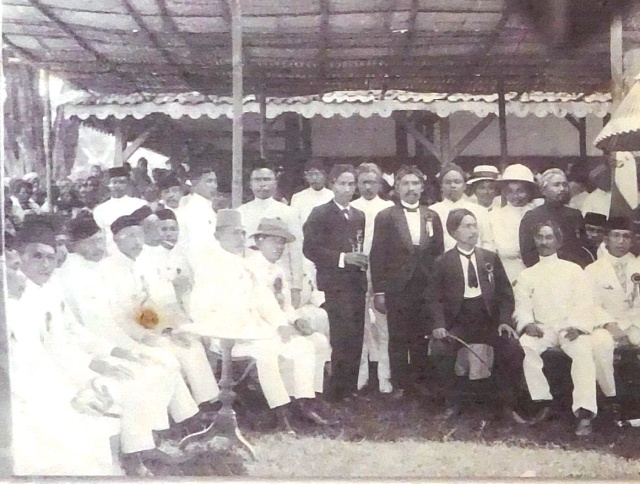 Founding meeting of the Blitar branch of Sarekat Islam in 1914 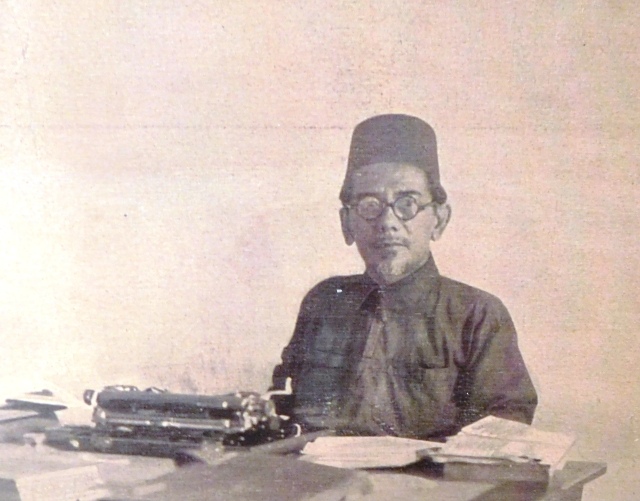 H. Agus Salim, one of the leaders of Sarekat Islam

1912            Ahmad Dalan established Meohammadijah in Yogyakarta, aimed at adapting Islam to modern Indonesian life. It established schools along modern lines, where Western subjects as well as religion were taught. By the 1920’s it was the dominant force in Indonesian Islam and the most effective organisation in the country.

1912              The Indische Partij was a short lived but influential political organisation founded by the Eurasian journalist, Earnest Douwes Dekker and Javanese physicians Tjipto Mangoenkoesoemo and Soewardi Soerjaningrat. The parties aim was to unite all the people of the Indies in the struggle for an independent nation, using the slogan of ‘The Indies for the Indiers’. In 1913 the party was banned and its leadership exiled to the Netherlands. 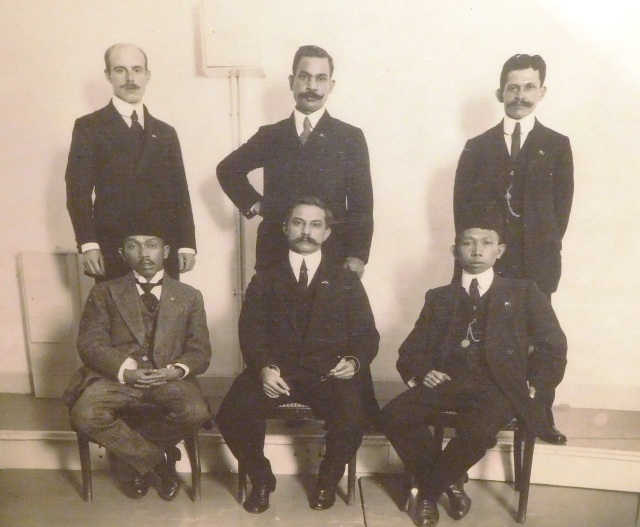 1918         Jong Java was founded by Raden Satiman Wirjosandjojo. The major aim of the association was to establish good relations between the Indonesian students in Java, so they could come to some agreement about the future direction of their land and people. This was followed by Jong Sumatren Bond (The Young Sumatren Association) led by Mohammed Hatta and Mohammed Yamin, and other groups such as Jong Minahasa, Jong Ambon and Yong Celebes.

Mohammed Yamin, one of the founders of the Yong Sumatren Bond

Dr. Sam Ratulangi, one of the founders of Jong Celebes

1924              The Algamene Studie Club (General Study Club) was formed in Bandung by Sukarno, a student at the Technische Hoogeschool (Technical College), who was familiar with the the ideas and work program of the Perhimpoenan Indonesia. A year later a new student association came into being which was the P.P.I.I (Perhimpoenan Pelajar-Pelajar Indonesia, which sought to unify the existing youth associations and the committee was the driving force behind the organisation of the first (1926) and second (1928) Youth Congress.

1927                          The Partai Nasional Indonesia was founded in Bandung by former student leaders (Sukarno) and ex-Perhimpoenan Indonesia members. In an important move towards independence the P.N.I was based on the idea of non-cooperation with the government of the Dutch East Indies.

P.N.I. Congress in Batavia, including Sukarno in the centre, 1928

1927                 Four members of the Perhimpoenan Indonesia (The Indonesian Association) were arrested by the Municipal Police in the Hague and charged with subversion in alliance with the Communists.

1928                   The second Indonesia Youth Congress was held in Batavia on the 28 October, the following resolution was passed and became known as the Sumpah Pemuda or Youth Pledge:

Kedoea. Kami poetra and poetri Indonesia mangakoe bebangsa yang satoe, bangsa Indonesia. We the sons and daughters of Indonesia acknowledge one nation, the nation of Indonesia. 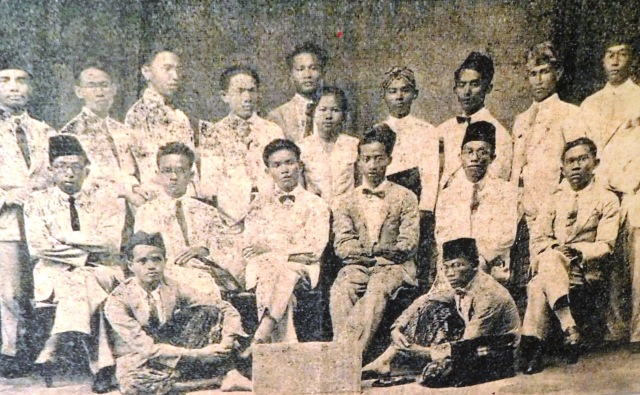 Delegates from Pemuda Indonesia at the Second Indonesia Youth Congress, 1928

1929           P.N.I meetings and activities are infiltrated and disrupted by agents of the colonial secret police and Sukarno and other key P.N.I leaders are arrested. In 1930 he gave his famous speech against colonialism, ‘Indonesia Menggugat’ or ‘Indonesia Accuses’ in the Langraad courthouse in Bandung, before the court process was interrupted and he is sentenced to four years in prison. He was released from prison in 1932 and then exiled to Ende in Flores in 1933 and Bengkulu in 1938

Soekarno, his three co-accused and their lawyers at the Langraad Courthouse

1934           The New P.N.I leaders, Hatta and Sjahir are arrested and later sent into internal exile first to Boven Digoel in Papua and then to the island of Banda in the Moluccas. Where they joined other exiled nationalists such as Iwa Kusumasumantri and Dr. Cipto Mangunkusumo.

17 August 1945.        Two days after the Japanese surrender, Indonesia’s independence is proclaimed in a short statement signed by Sukarno and Hatta. 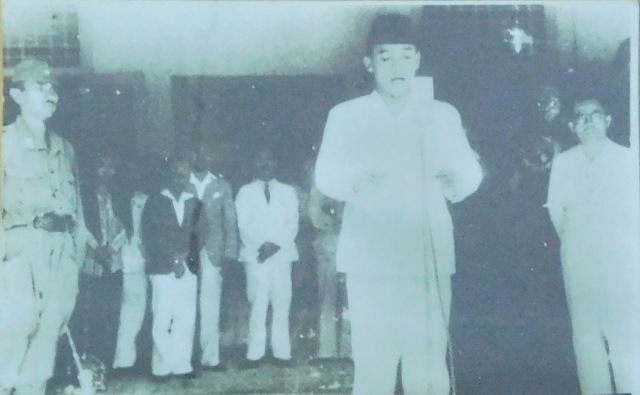 Sukarno reading the Proclamation of Independence on 17 August 1945

Thanks to Erasmus Huis, in conjunction with the Nationaal Archief in the Netherlands and the Arsip National in Indonesia, for organising the exhibition on ‘The Birth of the Indonesian Youth Movement’ from 2 July until 3 September 2018, which is on display at the Kerta Niaga building in Jakarta Kota and from which much of this material was drawn.