In Search of the Wallace hut on the island of Waigio

In June and July 1860, Alfred Russel Wallace sailed north from the island of Ceram in Maluku to the island of Mysool and then to the south coast of the island of Waigio near Papua in search of Birds of Paradise.

‘Leaving the village the next morning (July 1st) with a light wind, it took us all day to reach the entrance to the channel, which resembled a small river, and was concealed by a projecting point, so that it was no wonder that we did not discover it amid the dense forest vegetation which everywhere covers these islands to the water’s edge’.

Searching for the ‘Wallace Hut’ on Waigio (Ian Burnet)

‘This part of Waigiou appears to consist of almost entirely of raised coral. The shores were a range of low limestone cliffs, worn out by water, so that the upper parts generally overhung. At distant intervals were little coves and openings, where small streams came from the interior; and in one of these we landed, pulling our boat up on a patch of white sandy beach. Immediately above was a large newly made plantation of yams and plantains, and a small hut, which the chief said we might have use of if it would do for me’.

He spent from July to September 1860 in his hut and this is its description from The Malay Archipelago:

‘It was quite a dwarf’s house, just eight feet square, raised on posts so that the floor was four and half feet above the ground, and the highest part of the ridge only five feet above the floor. As I am six feet and an inch in my stockings, I looked at this with some dismay; but finding that the other houses were much further from water, were dreadfully dirty, and were crowded with people, I at once accepted the little one, and determined to make the best of it.

In the lower part I fixed up a small table, arranged my boxes, put up hanging shelves, laid a mat on the groundwith my wicker chair upon it, hung up another mat on the windward side, and then found that, by bending double and carefully creeping in, I could sit on my cahir with my head just clear of the ceiling. Here I lived pretty comfortably for six weeks, taking all my meals and doing all my work at my little table, to and from which I had to creep in a semi-horizontal position a dozen times a day; and after a few severe knocks on the head by suddenly rising from my chair, learned to accomodate myself to circumstances’. 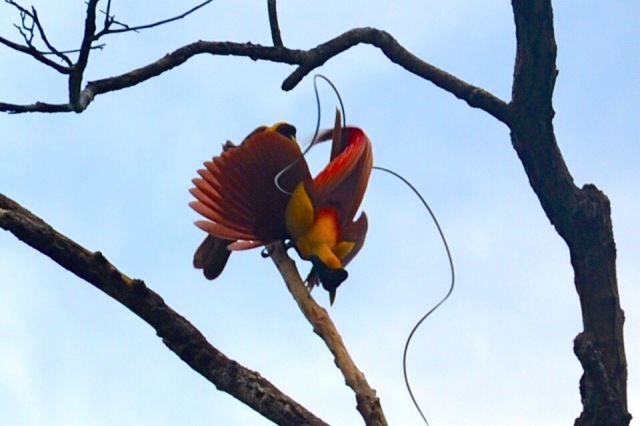 ‘I began to think that we would not get this magnificent species. At length the fruit ripened on the fig tree close to my house and many birds came to feed on it; and one morning as I was taking my coffee a male paradise bird waa seen to settle on its top … the head back and shoulders are clothed with a rich yellow, the deep metal green colour of the throat extends further over the head, and the feathers are elongated on the forehead into two little erectile crests. The side plumes are shorter, but are of a rich red colour, terminating in delicate white points, and the middle tail feathers  are represented by two long rigid glossy ribbands, which are black, thin, semi-cylindrical and droop gracefully into a spiral curve’. 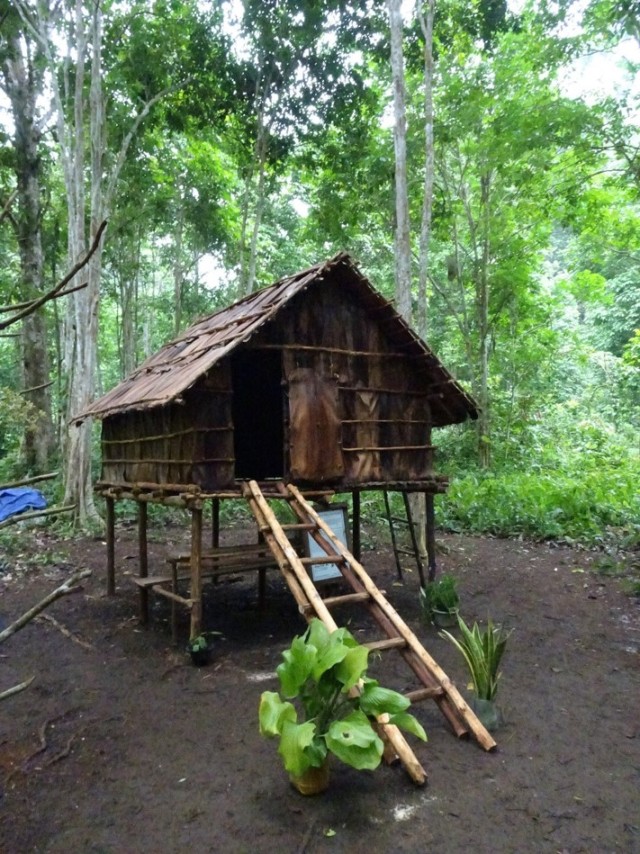 This plaque at the Wallace Hut honours the memory of both Alfred Russel Wallace and of Tony Witten of Flora and Fauna International, who was instrumental in having it built.

Find out more about the Alfred Russel Wallace, the Wallace Line and the region of Wallacea in Ian Burnet’s latest book – Where Australia Collides with Asia. 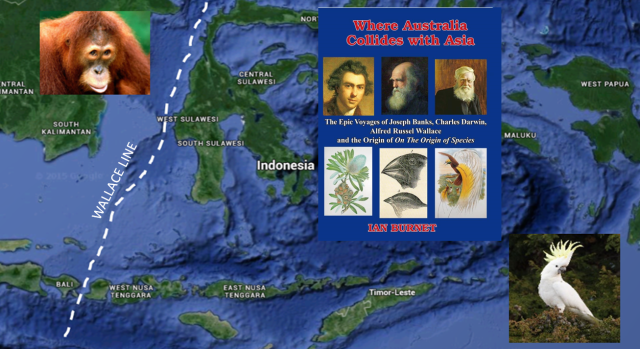