As you can see from this painting by Hendrik Jacobsz, it was possible in 1650 to see the mountains behind Jakarta from the harbour. Mountains which are about 60 km inland, are not far past the town of Bogor, and stand up to 3000 metres above sea level.

View of Batavia from the harbour.  Hendrik Jacobz, 1650, Rijksmuseum

With the millions that now live in Jakarta and the the air pollution produced by its cars and adjacent factories, these mountains are never seen, except for once a year during or just after Ramadan. The factories are closed for weeks over the Ramadan holiday. Many people and their cars have left for their home villages in Java and this Covid year many people have just stayed at home, leaving the streets deserted. With one good rain there are  suddenly clear skies over Jakarta!

View south towards the mountains from Jakarta with Gunung Gede and Gunung Pangrango on the left and Gunung Salak on the right.      Photo by Cun Cun

The highest point on Gunung Salak is 2211 metres and it creates a micro-climate around Bogor as rain clouds build up over the mountain during the day and then at mid-afternoon torrential rain falls on Bogor.  Salak is the name of a tropical fruit with scaly skin, however according to Sundanese tradition, the name was derived from the Sanskrit word Salaka which means silver. Gunung Salak can then be translated to Silver Mountain. I have climbed the mountain from the south and camped near the crater rim. It was a beautiful trek up through terraced rice fields, vegetable gardens, fruit trees, and then jungle on the way to the summit.

The breached volcano of Gunung Salak seen from Bogor.        Photo by Ehamburg

Gunung Pangrango is the highest of the three volcanoes at 3019 metres. The name Pangrango is thought to be originated from two ancient Sundanese words Pang and Rango which means “That which huffs and puffs” referring to the past volcanic activity of this mountain. I have camped and slept on the very top of the peak — and at this height it was very, very, cold.

A view of Gunung Pangrango taken from Gunung Gede at sunset.     Photo by Delima Putri

Here is Gunung Gede seen from the south side near Sukabumi with Gunung Pangrango on the left. Gede means big so this is clearly the big mountain. I have climbed to the rim of the volcanic crater and it is still active as it puffs steam and sulphur fumes.

Gunung Gede seen from the south near Sukabumi.      Photo from Wikipedia 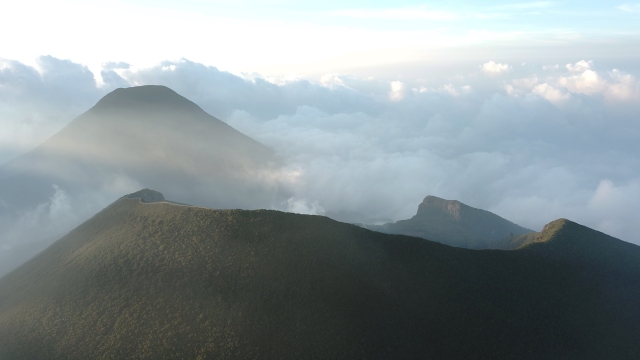 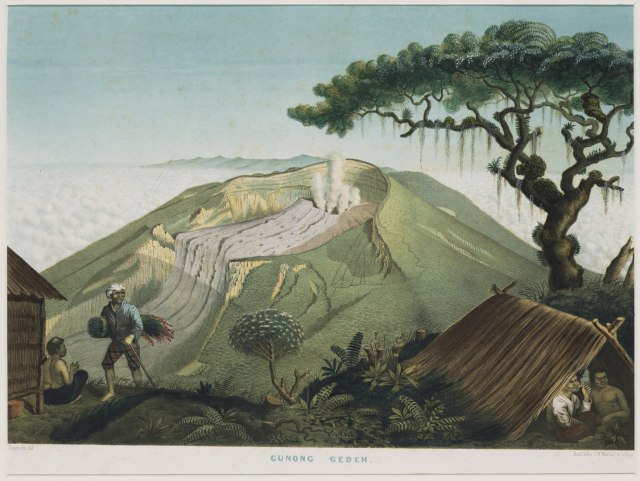 Author of the book, Spice Islands. Which tells the History, Romance and Adventure of the spice trade from the Moluccas in Eastern Indonesia over a period of 2000 years. Author of the book, East Indies.Which tells the history of the struggle between the Portuguese Crown, the Dutch East India Company and the English East India Company for supremacy in the Eastern Seas. Author of the book 'Archipelago - A Journey Across Indonesia'.
View all posts by ianburnet →
This entry was posted in Uncategorized and tagged bogor, gunung gede, gunung pangrango, gunung salak, ian burnet, indonesia volcanoes, jakarta. Bookmark the permalink.

8 Responses to Clear skies over Jakarta!