This year we had a multinational group of 5 Canadians, 6 Australians, 3 English, 2 Dutch and 2 Germans making up our passenger list, we were ably led by our guides Jennifer and Arif, and the whole crew of the Ombak Putih. We also added some new islands to our itinerary – Run, Lei-Lei and Machian. 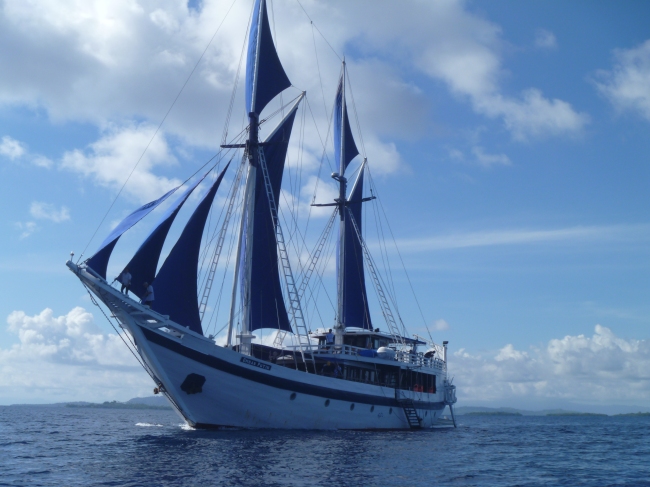 The Ombak Putih sailed overnight from Ambon on October 24 and the next day arrived at the island of Run. For those who know the history of the Banda Islands, the English famously swapped Run in 1667 for the Dutch island of Manhattan, in what was the real estate deal of the millennium. Who knew that Manhattan would become the ‘world’s capital’ and that the valuable nutmeg bearing island of Run would sink into obscurity?

Run village was delightful, the people friendly, the houses freshly painted and tidy. We even found the Manhattan Guest House for those who are interested in staying there overnight. Modern technology has also come to the village as we saw a recently installed set of solar panels and storage batteries to supply electric power to the village. We then explored the nutmeg plantations on the upper part of the island and remembered the islands colorful history in the struggle between the Dutch and the English East India Companies for a share of the nutmeg trade. Watch out for a separate blogpost on the history of Run and the adjacent island of Ai 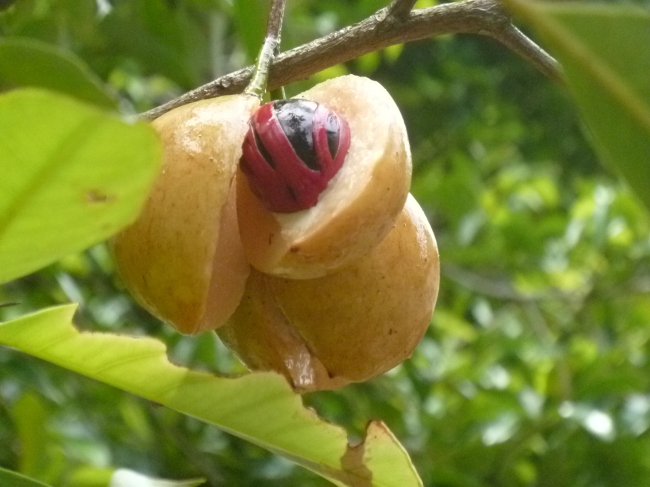 Banda was as delightful as ever and we enjoyed our two days exploring the old colonial buildings that were built by the Dutch East India Company (VOC) and the perkeniers they installed on the island. Perhaps the highlight of our visit was the rhythmic ‘nutmeg dance’ performed for us on the bastion of Fort Belgica by a dance group of twelve accomplished Bandanese girls.

The following day we had a spirited departure from Banda with chants and drumming from two kora-kora racing either side of the Ombak Putih, as they accompanied us through the ‘Sonnengat’.

Again, some of the best snorkeling was off the white sandy beach of the island of Molana near Saparua. The small dive resort here must do some business in other times of the year but was deserted when we arrived, so we had the whole island to ourselves.

A new dive spot was in the Guarici archipelago, just north of Bacan. Here, money has been invested in constructing a road of paving around the island of Lei Lei, and building some very nice wooden villas and a dive center to accommodate the tourists who are expected to come to here from Ternate.

It would be a great experience to fly to Ternate, then voyage down the Patinti Strait with its line of volcanoes arising directly out of the sea, and spending a few days diving off your own tropical island. Certainly no sign of the tourists this year but the facilities were still being completed and hopefully we will see some activity next year. After our walk around the island the villagers organized an impromptu traditional dance for us, very similar to an English ‘barn dance’, and probably based on a Portuguese folk dance introduced to the islands some 500 years ago. 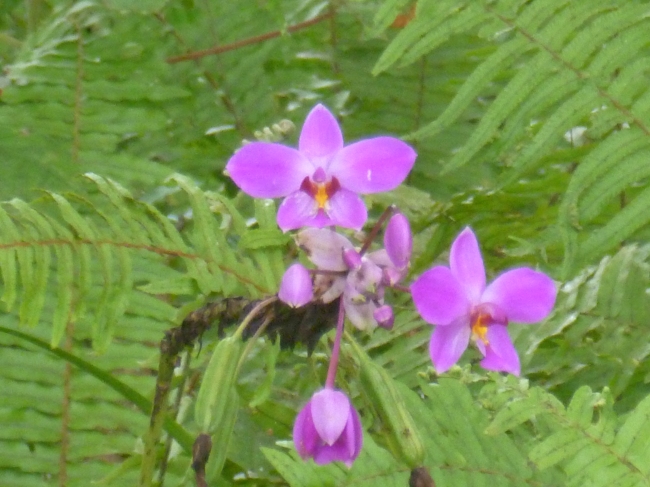 This year we were able to go ashore on the island of Machian which is about in the middle of the line of volcanic islands that form the Patinti Strait. Machian has the reputation of being the most prolific of the clove bearing islands and sailors have written how the aroma of the cloves could be smelt far out to sea. We landed in one village and then did a ‘jungle walk’ through the clove, nutmeg, and coconut trees to the next village, for me one of the highlights was some native orchids we found growing in the jungle.

Captain Ibrahim managed to time our arrival at the island of Tidore in the late afternoon and the sunset behind the islands had all the cameras clicking.

We then spent a morning exploring Tidore and an afternoon exploring Ternate before our final shipboard party and fond farewells the following day.

A date has been set for next year’s Spice Islands Sailing Adventure, it will be from October 8 -19, 2014. More details at http://www.seatrekbali.com