Posted on September 9, 2015 by ianburnet

Book Review: Archipelago – A Journey Across Indonesia, by Ian Burnet 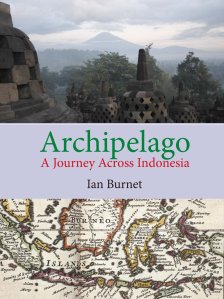 This beautifully illustrated and informative book takes the reader on a journey both through the landscape of Indonesia and also back through Indonesia’s past. It weaves a spellbinding experience that will take many of us through memories of past trips many of us have taken and will also entice us to explore parts of Indonesia where we have not yet ventured.

Ian Burnet, a geologist by trade, first came to Indonesia to work in 1968 and has maintained a life-long association with the country. The book chronicles his recent fulfilment of a life-long ambition to cross the archipelago and to tell its (hi)story. His long-term interest in eastern Indonesia resulted in his 2011 book, Spice Islands, and is the background to the boat trips he organises to Indonesia’s eastern islands (www.ianburnetbooks.com).

It was of course the spices found in Indonesia’s eastern islands that were the magnet that for over a thousand years drew the world’s attention to the archipelago. Spices, were more valuable by weight than silver or gold, and brought Indian, Chinese, and later Portuguese, English and Dutch traders to seek their fortune through pillage and trade. In so doing they brought to Indonesia the world’s cultures and religions (Buddhism, Hinduism, Islam and Christianity) to Indonesia where they transformed Indonesia into its current cultural and religious mosaic.

This is the tale that Ian skilfully tells. He begins his journey in the Malacca Strait, that important waterway that linked India to China . He then travels across Java where the Indianized historical feudal kingdom’s arose and created the wonderful temples of Borobudur and Prambanan, only later to succumb to Islamic trade and then European colonisation. He then crosses to Bali where Hinduism held out against Islam before eventually also being colonised by the Dutch.

His trip then takes him through Indonesia’s Nusa Tenggara islands with the fabulous komodo lizards and neglected cultural enclaves, the home of fabulous woven ikat. His journey ends in East Timor which had a similar history to Indonesia in terms of long European colonisation that was only brought to an end by revolutionary struggle, a story he relates in compassionate detail.

His journey is told through personal anecdotes that link directly to historical observations and insight, accompanied on virtually every page by often stunning photos taken by him en route.

This is a book that will delight, entice and inform both newcomers to Indonesia and old hands alike.

Ron was an Honorary Principal Fellow in the Faculty of Law at the University of Wollongong , NSW, Australia