The Whale Hunters of Lamalera

In eastern Indonesia the village of Lamalera on the south coast of Lembata Island and facing the Savu Sea, has carried out whaling for centuries. This is one of the few places in the world where people are still allowed to hunt whales, as long as they continue to only use traditional methods.

It is the sperm whales that are hunted as they migrate between the Indian and Pacific Oceans through the Lembata Strait. An average of 20 whales are captured each year during the whaling season, but when we were there this year the whaling season had nearly finished and only 3 whales had been captured, so the fishermen were forced to hunt whale sharks, dolphins and manta ray to provide food for the village.

Each of the different clans in the village have their own traditional wooden whale boats housed along the beach and ready to go to sea whenever migrating whales are spotted from whale watching platforms high above the village. Each boat is decorated with the clan symbol and manned by a crew of 8-12, including an experienced harpooner. 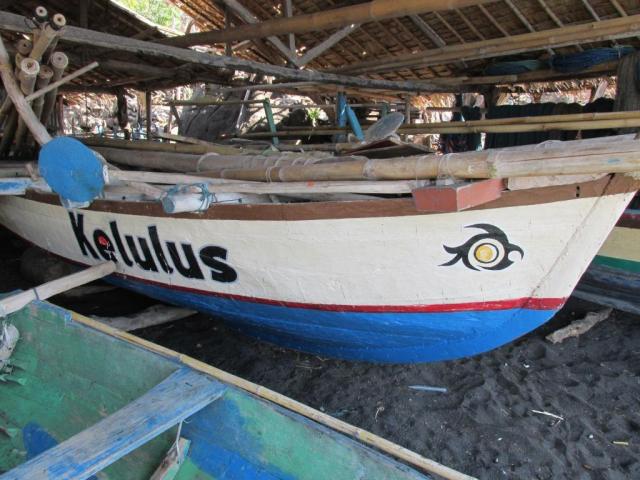 The hunt involves sailing close to the whale and then rowing furiously to close the gap. The harpooner then leaps onto the back of the whale and uses his body weight to embed the harpoon deep into its flesh. This is a dangerous occupation because sometimes people get hurt as arms and legs get entangled in the ropes, boats capsize as the speared whale dives deep, or the whale boat is towed far out to sea.

The whale meat is cut up on the beach and then dried on racks. The villages use the whale meat for their own food and as a trade item with villages on other islands in the region.

The Ombak Putih will be sailing again to Lamalera and the other eastern Indonesian islands from September 15-26 in 2016. Please find the details at

2 Responses to The Whale Hunters of Lamalera