‘Where Australia Collides with Asia’ – the first book reviews are in

Posted on September 5, 2017 by ianburnet 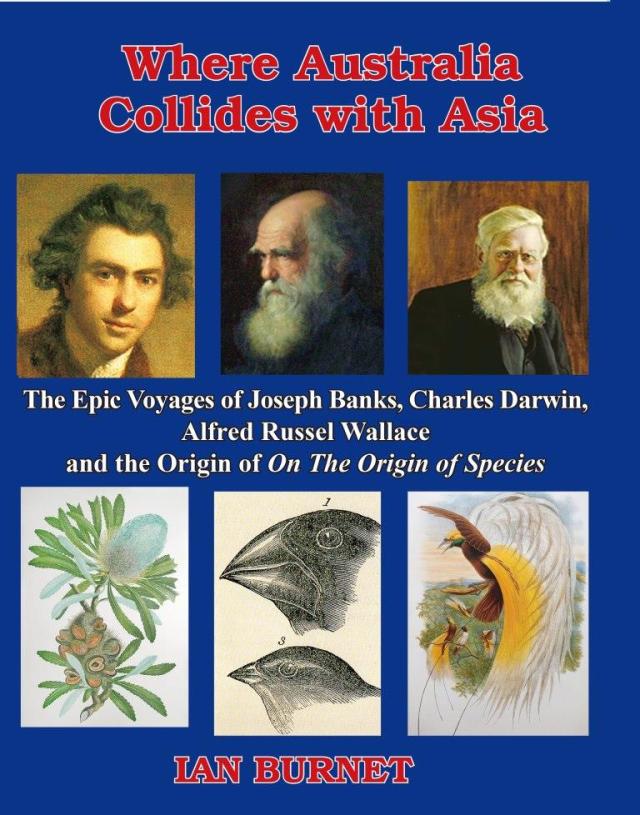 Published by Rosenberg Publishing in August 2017

I would like to thank Ian Burnet for writing ‘Where Australia Collides with Asia’. In his book he explains the significance of the work of these great scientists and states clearly the key place that our Asian neighbourhood has played in their ideas. It brings to life not just Darwin and Wallace but others such as Joseph Banks, Captain James Cook, Captain Robert FitzRoy of the Beagle and many others. Written in an easy to read style, with many illustrations, we are introduced to these individuals as real people and the personalities behind their famous names …
The decades Ian has spent living and travelling in Indonesia and his training as a geologist, have contributed many wonderful layers to this book. The fact that the first of the voyages he writes about is the voyage of the tectonic plates – the voyage of continent Australia – is a wonderful way to start his narrative as it ideally provides background to what is to come.
I commend this book – you will be drawn into another world – a world that has a deep effect on the way we see ourselves and life around us today.

These voyagers are the three brilliant English naturalists who take the empirical natural sciences from their infancy to an epiphany in a bit less than a century. The first is the wealthy young Banks who self funds himself onto James Cook’s circumnavigation, England’s first great voyage of deliberate scientific discovery. En route, Banks and his entourage are the first to scientifically record Australia’s utterly unique flora.
Darwin is even younger when good luck puts him on HMS Beagle for its five-year charting voyage. This exposes him to South American fossils, Galapagos Islands finches and New South Wales platypuses. Back home, Darwin incubates the idea of natural selection, but nervous about dethroning the stern Victorian Lord God of Creation, makes no anouncement.
Wallace is a self-educated working man who sells rare beetles, bird and animal skins for a living. He journeys across the East Indies travelling on mail boats, sailing ships, early steamers, schooners, native prahus and dugout canoes. In a malarial fever-dream he hits upon the idea of natural selection, synthesising all that he has observed in his many years of tropical travels, his letter from Ternate forces Darwin to finally get his masterpiece ‘On the Origin of Species’ into print.

Ian Burnet reminds us that Alfred Russel Wallace is not only the independent co-discoverer of evolution but also a founder of the science of bio-geography as in the discovery of the Wallace Line which separates the species of Asia from Australasia. He has applied his customary skills, in taking the vast bibliographies that document the lives and voyages of the three English naturalists and turning them into an easy and engaging read.