The great arc of the Indonesian archipelago starts north of the island of Sumatra and curves south and east until it reaches Papua. This arc of islands is defined by a string of active volcanoes, in Sumatra, Java, Bali, Lombok, Sumbawa, Flores and Banda, which erupt as the Indian Ocean plate is subducted under the Asian continental plate. Further east, the island arc is pushed to the north by the Australian continent, which has been relentlessly marching northward since it separated from Antarctica 45 million years ago. The continuing collision of the Australian continent and the Pacific Ocean plate has thrust the Papuan mountains up to a height of 5,000 metres above sea level, where a tropical glacier still exists only four degrees south of the equator. The huge Pacific Ocean plate is moving westward pushing the island arc back on itself and rafting segments of Papua hundreds of kilometres towards the west.

Our voyage on the Ombak Putih, a classical two masted Bugis Pinisi, starts in Ambon from where we sailed overnight to the nutmeg islands of Banda. Here we are at the easternmost extension of the island arc before it is cut off by the westward extension of Papua. The Banda islands represent a remnant volcanic crater with the newer volcano of Gunung Api formed in its centre. Some tectonic shift in the continental and oceanic plates occurred in 1988, causing Gunung Api to erupt, sending huge clouds of volcanic ash high into the atmosphere and molten lava to flow down its flanks and into the sea. These black lava flows are still evident as we sail into the sheltered harbour town of Banda Neira. 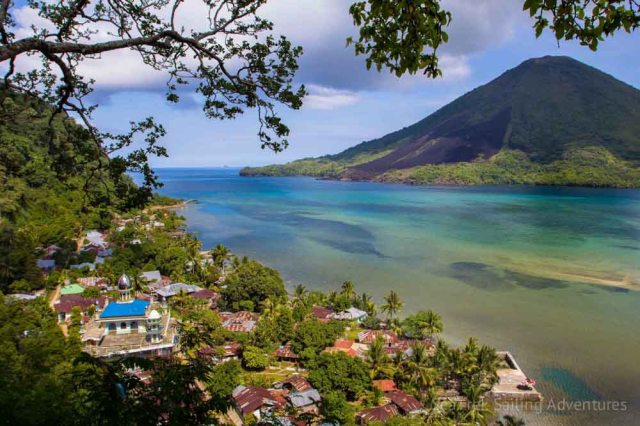 Gunung Api in the Banda Islands

Eastern Indonesia represents a unique part of the Earth’s surface because it is here that four of the earth’s great tectonic plates – the Indian Ocean, the Asian Continent, the Australian Continent and the Pacific Ocean – are in collision with each other. Three million years ago in the Moluccan Sea, these powerful forces fused together volcanic island arcs, seafloor sediments and coral reefs to create new land, forming the unusually shaped island of Halmahera. A subduction zone then formed along the western side of Halmahera causing a series of offshore volcanic eruptions.

Our voyage continues north and we are now sailing along the narrow Patinti Strait between the large four-fingered island of Halmahera and a chain of offshore volcanic peaks, which rise directly out of the sea before us. This voyage is one of the most beautiful in all of Indonesia and to make it even more spectacular we are accompanied by a school of dolphins welcoming us by diving out of the crystal clear waters beside our vessel. By mid-morning, the large island of Bacan is receding in our wake and the island of Kayoa lies ahead. Here, we pause to do what few others have done and our group swims across the Equator. Soon the island of Machian is in view, with wisps of cloud starting to build up around its volcanic peak. Machian was once the most prolific producer of cloves in all the Spice Islands and sailors have described how, with the wind in their faces, they could smell its sweet spicy fragrance from far out at sea.

The island is characterized by a central volcano, which has been breached by a large cleft caused by an earlier eruption. The same tectonic event that effected Banda in 1988 also caused the volcano on Machian to erupt explosively and 15,000 islanders were evacuated with some being permanently resettled on the main island of Halmahera.

The eruption of a volcano on Machian island in 1988

The Ombak Putih lands our group and guides ashore at one village on Machian and we walk along a coastal path for an hour or so until the next village. Walking through plantations of cassava, corn, cloves, nutmeg and coconuts, a particular flower attracts my attention. In my online search to identify the flower, I discovered an unusually named plant called Clitoria Ternatea. This generic name was given by the botanist Breyne in 1678 to describe an exotic plant found growing as a vine on the island of Ternate.

Owing to its similarity to a human body part, it was often used in traditional medicine to treat female sexual ailments and also as an aphrodisiac. The Portuguese, who were the first Europeans to reach Ternate, called it ‘fula criqua’ or the flower of creation, as in human creation. Taken from the northern Moluccas, this exotic cultivar is now grown all over the tropical and sub-tropical world. Commonly called the blue-pea, the butterfly-pea or the cordovan-pea, it is often grown as an ornamental plant —and you may have one in your own garden.

Our final destination is the twin islands of Ternate and Tidore, which for a millennia were the centre of the clove trade and from the harbour in Ternate we can look back at the volcanoes and our voyage along the Spice Islands.

The next voyage by the Ombak Putih to the Spice Islands is from October 8-19. There are still a few cabins left so please contact Sea Trek Sailing Adventures for more details at http://www.seatrekbali.com

Location: The Maluku Islands are on the Halmahera Plate. They are located east of Sulawesi, west of New Guinea and north and east of Timor. Major islands and island groups include Ambon, Aru, Halmahera, Ternate, Tidore and Seram.

Population: The whole of Maluku Islands have a population of about 2 million people. It is the least populous province in Indonesia. Ambonese-Malay is spoken in most parts of Maluku, with differing dialects and deep roots in Portuguese.

Getting there: Ambon and Ternate are the region’s air hub. Sultan Babullah airport in Ternate and Ambon’s Pattimura airport are served by Lion Air, Batavia Air, Garuda Indonesia Airlines and Sriwijaya Air daily.

Things to do: Banda islands is popular for its breathtaking views on snorkeling and diving excursions, as is the case for most Maluku islands. Great beaches come in abundance in Maluku islands, and it is a mountainous region, therefore hiking is a great activity to enjoy. Eat and drink well with an array of sea food in the islands, and try the famous rujak in Ambon.

Local transportation: On the islands, transportation is provided by bus, minibuses (bemo), taxi or chartered cars. Bicycles and rickshaws are available for the smaller islands. For island hopping, ferries and boats are your best bets.